First group of refugees evacuated from Libya to Rwanda 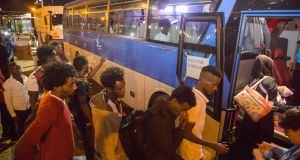 The first arrival of 66 refugees and asylum seekers from Libya at the Kigali international airport in Rwanda. Photograph: Minema/AFP

The first group of what is expected to be hundreds of evacuees have been moved to Rwanda from Libya, under a new programme involving the African Union and United Nations refugee agency.

The 66 refugees, who were Sudanese, Somali or Eritrean, flew from Misrata airport to Rwanda’s capital Kigali, arriving at about 9.30pm local time on Thursday.

The youngest person evacuated was a two-month-old girl called Hadia, a name which means “gift” in Arabic, according to UNHCR. She was born in the agency’s centre in Tripoli.

Twenty-five others were also children, nearly all of whom were without a family member, according to the UN agency. One of the evacuees had not left a detention centre for more than four years.

They were taken from the airport to a transit centre in Gashora, about 60km south of Kigali. They have been given asylum-seeker status, in advance of their refugee claims being properly assessed.

The group will have freedom of movement, access to education and be allowed to work, UNHCR said. They will also be given language and vocational training classes.

A psychologist, counsellors and other health professionals will work with the evacuees, some of whom have experienced torture and sexual violence during their time in Libya.

UNHCR estimates that running the evacuations to Rwanda will cost $10 million (€9.1 million) between now and the end of the year, which includes the cost of accommodation and basic aid and services for the evacuees.

“UNHCR urges the international community to support Rwanda’s gesture of solidarity with refugees by providing financial support and resettlement places,” the agency said in a statement.

Rwanda said it will initially take 500 refugees, in an agreement signed earlier this month.

The Great Lakes country is already sheltering about 150,000 other refugees, mostly from neighbouring Burundi and the Democratic Republic of the Congo.

For long-serving Rwandan president Paul Kagame, the evacuation is a chance to show the world Rwanda’s progress.

This week, he told the UN General Assembly in New York that Rwanda was ready to “receive and protect” the refugees, and said the agreement “is a clear sign we can co-operate to address complex problems”.

“Africa itself is also a source of solutions,” Mr Kagame told assembled delegates.

His speech came as Mr Kagame’s critics were shaken by the murder of Syldio Dusabumuremyi, a Rwandan opposition party member. The president – who won re-election in 2017 with a reported 98.8 percent of the vote – has repeatedly been condemned by human rights groups for exerting a tight control on citizens and failing to tolerate dissent.

For dozens of refugees though, Rwanda is a chance to experience a level of freedom they haven’t seen in years.

When they touched down on Thursday, several evacuees placed calls to others left behind in Libya, saying they had arrived safely.

“They accepted [going to Rwanda], because everyone needs to escape from Libya to any country to save [their] life. At this time life in Libya is becoming worse,” said an Eritrean, who spoke to the new arrivals by phone, though added that they are still concerned about what will happen to them in the longer-term.

“I think they are happy,” said an Ethiopian, also hoping for evacuation.