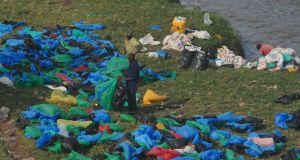 Kenyans collect used plastic bags from Nairobi River to resell in marketplaces near the Mukuru slum in Nairobi. Anyone selling, producing, or even carrying a plastic bag there now risks a €35,000 euro fine or up to four years in prison. Photograph: Wendy Stone/Corbis/Getty

Tourists are being warned to avoid bringing plastic bags to Tanzania from June 1st, when a ban will go into force throughout the country.

The Tanzanian government has issued a notice saying all plastic carrier bags will be prohibited from being “imported, exported, manufactured, sold, stored, supplied and used in mainland Tanzania”.

“The government does not intend for visitors to Tanzania to find their stay unpleasant as we enforce the ban. However, the government expects that, in appreciation of the imperative to protect the environment and keep our country clean and beautiful, our visitors will accept minor inconveniences resulting from this,” it said,

To date, 34 African countries have legislated to control plastic bag usage through bans or taxes. Of these, 31 are in Ssub-Saharan Africa, though not all have strict implementation of the laws.

In Rwanda, where plastic bags have been banned since 2006, travellers have their luggage searched crossing the country’s borders.

Frank Habineza, the founder and chairman of Rwanda’s Democratic Green Party, told The Irish Times he was very pleased to hear Tanzania is following suit. “The more countries that take it up, the more people will see it’s useful,” he said.

“Plastics are bad for the environment, bad for animals, bad for soils, so we would advise other countries to also ban plastic use.”

Kenya’s ban on plastic bags came in more recently, on August 28th, 2017. Anyone selling, producing, or even carrying a plastic bag there now risks a €35,000 euro fine or up to four years in prison.

However, Mr Habineza said he still sees a lot of plastics when he visits Kenya. “It has to be a total mindset, a total change, it’s not just putting up a fine.”

Countries aren’t alone in moving against plastics. In 2018, Islamist terrorist group Al Shabaab, which is aligned with al-Qaeda, made global headlines for banning plastic bags in areas they control in Somalia, saying they present “a serious threat to the well-being of humans and animals alike”.

The United Nations Environment Programme says the recent bans in Tanzania and neighbouring Zambia “are good news in terms of air pollution, given that much of Africa’s waste ends up in flames”, referring to the fact that rubbish is incinerated in some countries.

In March this year, the UN Environment Assembly, calling on countries to curtail plastic usage at its meeting in Nairobi, said only nine per cent of the nine billion tonnes of plastics ever produced had been recycled.

“If the current consumption patterns and waste management practices do not change, by 2050 there will be around 12 billion metric tonnes of plastic litter in landfills and the environment,” it said.

Bangladesh became the first country in the world to ban thin plastic bags in 2002, and has been followed by countries including China, Australia, and Italy.