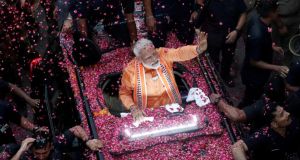 Indian prime minister Narendra Modi’s Hindu nationalist Bharatiya Janata Party is readying itself to return to federal power for the next five years, after exit polls predicted a comfortable win in the general elections.

The final results will be announced on Thursday, after votes cast by some 577 of 900 million eligible voters, over seven rounds of polling staggered over 39 days, are counted across the country.

A clutch of at least eight exit polls have indicated that the BJP and its allies are poised to win between 287 and 365 seats in the 545-member house, well above the 272 seats needed for a majority.

This number would equal if not exceed the BJP’s victory in the 2014 elections, possibly registering an even higher vote percentage in a better-than expected result for the party.

In Modi’s western home state of Gujarat, cow slaughter is punishable with imprisonment of up to 14 years

According to the exit polls, the main opposition Congress Party-led alliance is likely to win between 77 and 132 seats, while assorted regional parties will capture between 69 and 136 seats after a bruising election that captivated the country.

Though many opposition leaders and analysts publicly expressed doubts regarding the exit polls’ accuracy, some privately conceded that the figures were relatively close to reality.

One senior Congress Party MP, for instance, suggested that the polarising but hugely popular Modi had almost single-handedly managed to steer the BJP to a second decisive victory.

He said the PM’s “relentless and muscular campaign”, which reiterated nationalism, populism and a robust national security policy at rally after well-attended rally across the country, had turned it into a presidential-style election, focused on himself.

“It was almost as if Modi was singly pitted against all the 545 opposition candidates,” said the Congress MP, who declined to be named as he was not authorised to speak to the media. The BJP, he added, was incidental to Modi’s campaign.

“Modi’s electoral pitch was more about fear and anxiety than about hope and measures to tackle India’s agrarian distress, its economic slowdown and galloping unemployment,” said Seema Mustafa of the Centre for Policy Analysis.

He aggressively portrayed himself as the only Indian leader capable of ensuring the country’s security by constantly referring to the air strikes he had ordered in February against an alleged militant training camp inside Pakistan, she said.

Unlike in the 2014 campaign, when Modi concentrated on vikas, or development, employment generation and female empowerment, his election speeches focused on the danger the minority Muslim community posed to the majority Hindus.

Muslims comprise about 16 per cent of India’s population of more than 1.3 billion, while Hindus make up more than 80 per cent.

Senior security officials fear that Modi’s return to office with an impressive electoral majority will fuel greater tension with nuclear rival Pakistan, and further exacerbate the 30-year-old Muslim insurgency in northern Kashmir state that has claimed more than 70,000 lives.

The new administration will partly focus on cow-protection programmes in a bid to placate the Hindu community that considers the animal sacred.

Under BJP rule, most Indian states have initiated strict legal measures to protect cows, bringing all trade in cattle to a halt and adversely impacting on the country’s fragile rural economy.

In Modi’s western home state of Gujarat, for example, cow slaughter is punishable with imprisonment of up to 14 years.

Fodder prices have escalated by nearly a third over the past year but, in keeping with the BJP’s fiat, all farmers are legally bound to keep their cattle even after they have stopped producing milk. This had led to many such animals being abandoned.

The zeal to protect cows had resulted in at least 60 people, mostly Muslims, being lynched or beaten to death by Hindu mobs on suspicion of either abandoning the animals or selling them for slaughter, or simply for possessing beef.