Jailed Catalan politicians due to appear at parliamentary opening 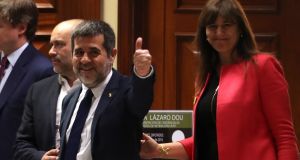 Five Catalan political leaders who are on trial for rebellion are scheduled to attend the Spanish parliament on Tuesday for the inauguration of the new legislature, amid uncertainty over whether they will be allowed to take part in parliamentary activity.

Oriol Junqueras, Josep Rull, Jordi Turull and Jordi Sànchez won seats in Congress in last month’s general election, despite being in jail and on trial in the supreme court. Fellow pro-independence politician Raül Romeva, who is also behind bars and on trial, was elected to the Senate. All five are due to be escorted from the prison where they are being held in Madrid to attend parliament’s opening session.

On Monday, the trial was suspended as the five men picked up their parliamentary credentials from the upper and lower houses. Their trial is due to resume on Wednesday.

“Today we have been able to leave Soto del Real prison thanks to your votes so that we can collect our credentials,” Mr Junqueras, former vice-president of Catalonia and currently leader of the Catalan Republic Left (ERC), said in a brief video posted on Twitter. “Your votes have freed us.”

Mr Romeva also represents ERC, while Messrs Rull, Turull and Sànchez won seats for Together for Catalonia (JxCat). None of them was allowed to address the media or meet privately with colleagues during their visit, which was closely controlled by police.

JxCat spokeswoman Laura Borràs described the restrictions on the jailed parliamentarians as “scandalous”.

All five are facing charges of violent rebellion and sedition for their alleged roles in Catalonia’s failed bid for independence in 2017, and could face lengthy jail sentences if found guilty. The trial began in February and is expected to end next month, although a verdict is unlikely before the summer.

Macarena Olona, a newly elected member of Congress for the far-right Vox party, which is one of the plaintiffs in the supreme court trial, decried the fact that the jailed Catalan leaders had been allowed to appear in parliament. She described their visit as “a failure of the rule of law that means five criminals have managed to get into public institutions in order to destroy Spain”.

ERC made gains in last month’s election, securing 15 seats in Congress and it could potentially be key in allowing the Socialists of prime minister Pedro Sánchez to form a new government after they emerged as winners but fell short of a majority.

However, although the jailed politicians are allowed to attend today’s session, the ability of the four members of Congress to take part in parliamentary business appears to be in the hands of the lower house’s presiding council.

Both the conservative Popular Party (PP) and the Ciudadanos party have called for the presiding council to prevent the four from being able to take up their seats. If that were to happen and the suspended politicians did not delegate their seats, the change in parliamentary arithmetic could make the securing of a majority marginally easier.