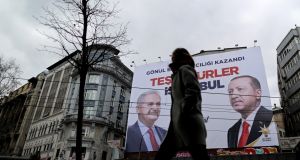 Official results in local elections that appear to have delivered a blow to President Recep Tayyip Erdogan’s dominance over Turkey have been pushed back until next week, as the ruling Justice and Development party (AKP) said it had decided to lodge objections in Istanbul’s crucial neck-and-neck mayoral race.

The head of Turkey’s election board, Sadi Guven, said on Tuesday that appeals in elections for mayors and municipal leaders in 30 cities, 51 provincial capitals and 922 districts would be evaluated this week and parties may file objections to board decisions on Friday, meaning final results are not expected until April 11th at the earliest.

Tensions are running high across the country after unofficial initial results in Sunday’s elections pointed towards wins for the secular opposition People’s Republican party (CHP) in cities around Turkey – including Ankara, the capital, and Istanbul, the country’s cultural and economic centre.

The predicted opposition gains were a surprise for the ruling government coalition and for the bloc of opposition parties that banded together to maximise the chances of capitalising on voters’ dissatisfaction with the government’s handling of Turkey’s burgeoning economic crisis.

In Ankara, the CHP candidate Mansur Yavas is predicted to have secured 50.9 per cent of the vote, leaving the AKP candidate trailing with 47.1 per cent, a result that would end a quarter century of Islamist party control of the capital. The AKP said it would appeal.

A final result is yet to be released in Istanbul, where the official vote count was suspended more than once as ballot boxes showing a lead for the CHP’s Ekrem Imamoglu were counted.

The AKP candidate, the former prime minister Binali Yildirim, acknowledged on Monday that Mr Imamoglu was about 25,000 votes ahead, but said he believed the CHP’s lead was due to 300,000 invalid votes. His party said on Tuesday it would contest the results in all 39 of Istanbul’s districts, Hurriyet newspaper reported on Tuesday.

Both parties have claimed victory, with Mr Imamoglu updating his Twitter profile to call himself mayor of Istanbul.

While the AKP secured more than 50 per cent of votes nationwide, the predicted opposition wins came despite Turkey’s heavy pro-government media bias, allegations of AKP interference with the electoral roll and arrests of opposition candidates across the majority-Kurdish southeast of the country over alleged links to the outlawed Kurdistan Workers’ party (PKK).

The reported results, as they stand, will inflame relations within Erdogan’s own party and complicate government efforts to combat Turkey’s economic problems. The country officially entered a recession in February and inflation is hovering at about 20 per cent, sending the cost of living soaring. – Guardian