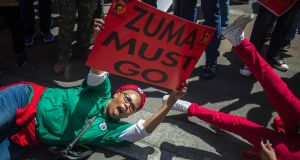 Alliance partners of the African National Congress led more than a dozen mass protests across South Africa on Wednesday that called for an end to government corruption and President Jacob Zuma’s time in office.

The Congress of South African Trade Unions (Cosatu) and the South African Communist Party (SACP) jointly mobilised thousands of workers and concerned citizens to participate in their protest action, which took place in all nine provincial capitals.

Cosatu also called on its more than one million members to strike as part of the protest, but it is unclear how successful that appeal was.

The demonstrations reveal how frayed the relationship between the tripartite alliance partners has become in recent years. It is primarily strained over allegations that Mr Zuma is benefiting from, as well as facilitating, widespread corruption in his government.

Ahead of the marches, SACP general secretary Solly Mapaila referred to Mr Zuma, who is also ANC president, as an “elite predator” who is harming the country.

The SACP and Cosatu believe the president and his government allies are helping private sector companies to benefit illegally from state contracts in return for kickbacks, a practice known as state capture.

Specifically, they believe that companies owned by Gupta brothers Atul, Ajay and Rajesh are making billions of rand illegally from their business deals with various state-run enterprises and government ministries.

As a result, Cosatu called for a review of all government contracts involving Gupta-owned businesses.

Mr Zuma and the Guptas deny any wrongdoing, and claim they are being used as pawns in the ANC’s internal power struggles.

Cosatu and the SACP entered into the tripartite alliance with the ANC in 1990 to oppose white minority rule, and the coalition has continued to the present day despite the ideological differences that exist between the three.

Post-1994, the alliance was reconfigured to unite the largest possible cross-section of South Africans around efforts to develop the country’s fledgling democracy.

In line with this goal, the SACP and Cosatu have declined to contest general elections in the post-apartheid era, but their senior officials are always given top positions in ANC-led governments at all levels.

Given their history, the decision by both groups to openly instigate protests against Mr Zuma’s rule is an unprecedented move.

Many experts also see the mass action as an extension of the factionalism that has gripped the ruling party in the run-up to its elective conference in December.

Cosatu and the SACP have both openly backed ANC deputy president Cyril Ramaphosa to take over from Mr Zuma in December, rather than the president’s preferred candidate, his ex-wife Nkosazana Dlamini-Zuma, who is a former government minister.

Before the protests got under way, Cosatu and the SACP insisted they were not linked to the ANC’s elective conference, but marchers in Durban and Johannesburg were clearly heard calling for Mr Ramaphosa to be the next president of the ruling party.