Irish in Catalonia: Scepticism and idealism as independence vote looms

Some fear the impact the vote will have on business and tourism, while others admire the way Catalans assert their culture and language 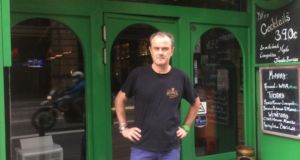 Ken McCarthy, from Co Mayo, outside McCarthy’s Bar in Barcelona. “If they declare independence [unilaterally], they’re a rogue state and you can’t trade with them.”

As he calmly sips a pint of lager at the bar of the pub he owns in central Barcelona, Ken McCarthy hardly looks like a man who is worried about the future. The 57-year-old from Co Mayo opened McCarthy’s Bar in 2004, shortly after arriving in Spain and it has flourished ever since, as the Catalan capital has become a global tourist draw.

But he’s watching the calendar with a nervous eye, as Catalonia’s referendum on independence, scheduled for this Sunday, approaches.

“I don’t think there’s a chance in the world that Madrid will ever recognise it,” McCarthy says of the vote. Given that the Spanish government has vowed to block the referendum, deeming it illegal, it is still unclear if it will go ahead.

“If Spain doesn’t recognise it, then yes, I’m very worried about it. Because if they declare independence [unilaterally], they’re a rogue state and you can’t trade with them, they’ll have nothing coming into the ports, no flights coming in. Our business is over, I mean it’s gone!”

One of McCarthy’s customers, John Kearns, takes a similar view. A Dubliner who paints yachts and works as a deckhand in Barcelona marina, Kearns (37) is sceptical about the referendum project.

“I think it should take place but not under the circumstances that have been created for it,” he says. “I don’t think it’s right they’ve taken government money for it. I don’t think Madrid’s response is right either. I don’t think anything is right about the situation, to be honest.”

That response by the Spanish state and government has included arresting Catalan government officials, seizing ballot papers, deploying police reinforcements to the northeastern region and taking partial control of the region’s finances.

“Ours was a revolution – this is not a revolution, it’s a vote,” he says. “They’re not under martial law here like they were under the Franco regime.” He adds: “They’re not being downtrodden here, by any stretch of the imagination and they have a fair amount of autonomy.”

“They probably feel [a kinship] with me because I’m Irish and they think all Irish people are rebels and so on,” he says with a laugh. “I just say to them that I think independence would be a disaster.”

Nonetheless, he admires the way Catalans assert their culture, particularly the language, which is widely used across the region. “I wish Irish people were as proud of their language as Catalans,” he says.

In the town of Sant Cugat, north of Barelona, Dave Walsh is much more invested in Catalonia’s independence drive. He and his partner, who is from the Catalan region of France, moved to Catalonia in March of last year from Brussels. They had been following developments in the region over recent years.

“It seemed Catalans were dreaming of a better world and how to do things differently,” says the Wexford native.

If they do become an independent state, where will that leave the government here, where will it leave my business?

Working in communications for environmentally focused NGOs, he has been particularly impressed with efforts the region has made in areas such as fracking and wage equality. Walsh (44) hopes his two-year-old son will grow up in an independent Catalonia, although he is dismayed at Spain’s attempts to stop this Sunday’s vote.

“The Spanish government and [governing Popular Party] have been asleep at the wheel, waiting for it to end and now it’s got out of control,” he says.

Paul Slevin (40), a Dubliner who runs a language academy in Barcelona, married into a Catalan pro-independence family. Unsurprisingly, he sympathises with local grievances, but he is deeply unsettled by the upcoming vote.

“If they’re allowed to have the referendum on Sunday, is it going to be a mess?” he wonders. “If they do get a Yes, where will they take it? If they do become an independent state, where will that leave the government here, where will it leave my business?”

“In Ireland we’ve had so many referendums we’ve got used to it,” he adds with a smile. “They should definitely be allowed to vote. But where it goes, I don’t know.”