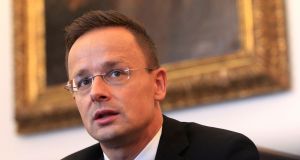 Ukraine is trying to limit damage to relations with several European Union states caused by changes to its education law, after Hungary vowed to prevent it from deepening ties with the bloc until the reforms were scrapped.

The pro-western government in Kiev insists the changes will boost the teaching of Ukrainian while protecting the languages of the country’s ethnic minorities, but Hungary, Romania, Russia, Bulgaria and Greece have all criticised the new law.

“Hungary will block all steps within the European Union that would represent a step forward in Ukraine’s European integration process,” said Hungarian foreign minister Peter Szijjarto.

“We can guarantee that all this will be painful for Ukraine in future.”

Ukrainian education minister Liliya Hrynevych was due to meet her counterpart from Romania to discuss the issue on Wednesday, after Romanian president Klaus Iohannis criticised the reforms and cancelled a planned visit to Kiev.

Ms Hrynevych intends to meet Hungarian officials next month and Poland has also requested talks, while refraining from joining criticism of the new law.

Ukrainian officials say critics are misrepresenting the reform, perhaps to pander to nationalist sentiment at home; Hungary’s populist ruling party, for example, is already ramping up its bid for re-election in a vote due next spring.

The reforms will make it compulsory for most lessons in state schools to be taught in Ukrainian from grade five, but some classes could also be taught in other EU languages and private schools could teach in any language they wish.

Advocates insist this will improve currently dismal levels of Ukrainian ability in some areas with large ethnic minorities, where children can now go through their entire school career being taught mainly in Russian, Hungarian, Romanian or other languages.

These children’s poor grasp of the state language prevents them going on to jobs in national and local administration, and weakens the unity of a 46-million-strong country under huge pressure from Russian aggression, officials say.

Though the law’s wording is somewhat vague, it appears to ban teaching in Russian after grade five – a major change in a country where Russian is used almost as much as Ukrainian and serves as the main language in hundreds of schools.

Russia’s parliament condemned the reform on Wednesday as “an act of ethnocide against the Russian people”, and EU spokeswoman Maja Kocijancic urged Ukraine to seek the Council of Europe’s opinion on the issue.