Authorities bus people out, cut electricity and gas after major incident at military base

Explosions at a military ammunition depot in central Ukraine were seen in the early hours of Wednesday, September 27th, 240 km from the capital. Ukrainian Prime Minister Volodymyr Groysman said 'external factors' were behind the incident. 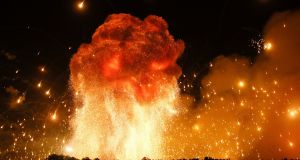 A powerful explosion is seen in the ammunition depot at a military base in Kalynivka, west of Kiev, Ukraine, early on September 27th, 2017. Photograph: Efrem Lukatsky/AP Photo

Ukrainian officials have removed tens of thousands of residents after a fire and ammunition explosions at a military base.

The Interior Ministry said on Wednesday that firefighters were still putting out the blaze which broke out in the town of Kalynivka, 120 miles (190km) southwest of the capital, Kiev, late on Tuesday.

Authorities bussed more than 30,000 people out of the area and turned off the electricity and gas supply.

Four residential buildings were damaged by the fire but no casualties were reported.

Prime minister Volodymyr Groysman, who arrived in the area early on Wednesday, said on local television the situation was under control. The cause of the fire was under investigation.