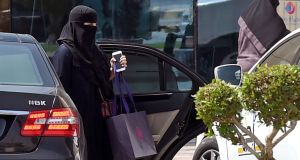 A Saudi woman outside a mall in the Saudi capital Riyadh a day after the government lifted a ban on women driving. Photograph: Fayez Nureldine/AFP/Getty Images

Saudi women have hailed a move by the conservative kingdom’s ruler to allow them to drive as a landmark moment in a society where gender roles have long been rigidly demarcated and strictly enforced.

Many women responded with jubilation to the law change, which activists and senior Saudi officials claim marks a watershed for the country.

“The mindset has shifted,” said Sultana al-Saud (26) from Riyadh. “We weren’t waiting for our families to accept, we were waiting for something larger to back us up, a backbone, which is the government.

“This is a huge step for women, it’s nice to see women behind the wheel, metaphorically I believe it’s like her leading her life now. The patriarchy is slowly but surely turning to [a] land of equality. This is amazing. It’s the first few steps of freedom, we didn’t even reach 2030 yet,” she said in reference to a government plan to transform Saudi society. “We are part of this big vision. We women are now taken into consideration.”

Under the new law, women can legally obtain driver’s licences without having to ask a male guardian for permission, despite “guardianship” laws that grant Saudi men power over women relatives.

Women all over the Gulf can drive, it was about time we Saudi women get the right to as well

Less than a day after the royal decree was issued, Saudi women said the shock was still being absorbed across the kingdom, where societal rules are often governed by an inflexible reading of Islamic teachings.

The commission of top Islamic clerics tweeted: “May God bless the king who looks out for the interest of his people and his country in accordance with sharia law.” Dr Abdel-Latif al-Sheikh, the former head of the religious police, tweeted: “Women driving is not against sharia and women will choose what best suits them.”

Sheikh Khalid al-Mosleh, a professor of religion in Saudi Arabia, also tweeted that “allowing women to drive answered the needs of a big portion of the population”, and added a lengthy justification for the move under Islamic law.

“There’s still a lot of rumours going on,” said Saud. “Sharia law can still play a large role in this. There are rumours about women not being able to drive [in parts of] Saudi, that you have to be above a certain age, that there might be a curfew.”

Sana Kayali (21) a university student in the Saudi capital said: “This is a very good beginning. Who would’ve thought we are starting to become modern. I believe change will take place gradually.”

Saudi leaders have long pledged to overturn the driving ban, which had meant that the country’s women were the only ones in the world legally banned from sitting behind the wheel. They had couched the delay as necessary to condition deeply conservative sections of Saudi society to a change that has broad implications for women’s roles.

Amal al-Dayyem (23) another university student in Riyadh, described the announcement as a “real beginning”. “Most families will be on board with this simply because people no longer want to spend a huge chunk of their salaries on drivers and transportation. We can do this on our own. Women all over the Gulf can drive, it was about time we Saudi women get the right to as well. Society will be accepting once they see how [much] easier matters and everyday chores will be once this is implemented.”

Madawi al-Blehid (36) a personal trainer, said: “This is something huge for us, women and girls. It’s not just about driving per se, this is about the fact that it is now our right and we have the freedom of choice. We’re no longer under the mercy of drivers and siblings.

“The fact that we need approval of family and society is normal. This is the first time so . . . we can’t just explode on the scene it will cause a lot of problems. Even in taking it slowly, there will be problems but we should be able to overcome [them]. Women are overjoyed. We woke up happy.”

Maysoon Sleiman (55) a doctor from Riyadh, said: “The thing is, a house cannot function properly without a driver and a lot of families cannot afford to hire one.

“This has nothing to do with religion, it’s our customs. Which is why I expect backlash and disapproval from a lot of women not just men. A long time ago, they used to shoot at satellite dishes because they were dubbed haram [forbidden], now they sell them. It’s going to be the same in this I believe. At least mothers can now safely drop their kids to school.”