More than 90% of Iraq’s Kurds vote for independence

Non-binding referendum escalates tensions, with ban on flights to region to be introduced 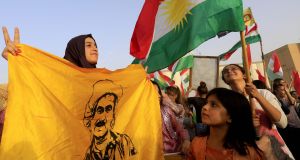 Syrian Kurds wave the Kurdish flag, in the northeastern Syrian city of Qamishli during a gathering in support of the independence referendum in Iraq’s autonomous northern Kurdish region. Photograph: Delil Souleiman/AFP/Getty Images

A referendum on independence from Baghdad has been approved by more than 90 per cent of voters, the election commission for Iraq’s Kurdish region said.

The non-binding vote is unlikely to lead to formal independence, and has escalated long-running tensions.

Iraq and its neighbours, along with virtually the entire international community, are staunchly opposed to any redrawing of the map.

Regional airlines also say they will comply with a Baghdad-ordered ban on flights to the region which is scheduled to start on Friday.

Hendrin Mohammed, the head of the electoral commission, announced the official results at a press conference on Wednesday, saying the referendum passed with 92.73 per cent support and turnout of more than 72 per cent.

The vote was held across the autonomous Kurdish region’s three provinces as well as in some disputed territories controlled by Kurdish security forces but claimed by Baghdad.

Flagship airlines from Lebanon and Egypt are among the carriers halting flights to Erbil, the capital of Iraq’s Kurdish region.

Mohamad El-Hout, chairman of Lebanon’s Middle East Airlines, said the decision follows the order to international carriers to stop serving Erbil and Sulaymaniyah, the capital and second city of the Kurdish region from Friday.

“We are committed to implement” the decision, Mr el-Hout said.

EgyptAir said on Wednesday it would also cancel flights to Erbil.

Low-cost airline FlyDubai said its flights to Erbil are in question from Saturday on.

Iraq’s prime minister Haider al-Abadi has given the Kurds until Friday to hand over control of their airports to federal authorities or face a flight ban.

The transport minister for Iraq’s Kurdish region said on Wednesday the region’s international airports had not violated any laws that would warrant their closure.

Mawlood Bawa Murad told reporters his ministry was ready to negotiate with Baghdad “if they want to implement the law and show that Iraq has one air space”.

The flight ban would affect “one way or another, the military aviation that operates from Erbil international airport”, which is used for the campaign against the Islamic State group.

EgyptAir said in a statement it would suspend flights between Cairo and Erbil starting on Friday, citing the Iraqi order.

1 Man found guilty of murdering girlfriend during drinking session
2 The real Contagion virus is out there and it’s causing virologists to worry
3 Cork shootings: Father and sons to be buried in two separate funerals
4 Majority of Irish Covid-19 cases come from variant that originated in Spain – study
5 Postmortem results on mother and two children found dead in Dublin due on Friday
Real news has value SUBSCRIBE