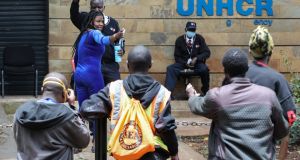 Refugees and security guards at a UNHCR compound in Nairobi on Monday, after a Ugandan refugee had taken his own life. Photograph: Daniel Irungu/EPA

A refugee was found dead at the United Nations Refugee Agency compound in Nairobi on Monday, in an apparent suicide his friends are saying highlights the strain placed on vulnerable people by the coronavirus pandemic.

The man was named as Aneste Mweru, a Ugandan in his 20s who fled his home country because he was gay.

In a statement, Fathiaa Abdalla, the UNHCR’s representative in Kenya, said staff were “profoundly shocked and saddened.” by the “tragic death”.

“Our thoughts and condolences are with his family and friends,” she said.

Many LGBT Ugandans escaped to Kenya following the introduction of an anti-homosexuality bill in 2014, nicknamed the “kill the gays” bill in western media. Though the legislation was later annulled, discussion around it led to widespread attacks and increased persecution of LGBT people across the country.

In Kenya, gay sex is also punishable by up to 14 years in prison, and a challenge last year in the high court saw this position reinforced.

The UN moved hundreds of Ugandan refugees to Nairobi in late 2018, following years during which they were told to stay in Kakuma refugee camp, northwest Kenya. During an October 2018 visit to Kakuma, LGBT refugees told the Irish Times they found it hard to hold down jobs and had been repeatedly assaulted and raped by police and refugees from other backgrounds.

In a series of Facebook posts, Refugee Flag Kenya, a gay rights organisation representing refugees, said Mr Mweru had been assaulted when he tried to seek help. A UNHCR spokeswoman said the organisation was in close contact with the Kenyan police and hoped an investigation by them would clarify what happened.

Refugees across the world are among those particularly affected by coronavirus lockdowns. Many lack proper documentation and work hand to mouth, if at all.

In Sudan’s capital Khartoum, refugees protested on Tuesday, saying they needed extra support to survive. “Refugees might be eradicated if emergency help doesn’t reach [us]\. It’s the worst time ever,” one told The Irish Times through WhatsApp. He said while social distancing measures had been announced, without accompanying aid they were left in a situation without “humanity”.

On March 25th, the UNHCR issued an appeal for €232 million to help with its Covid-19 response. “As the pandemic spreads, our response must encompass the most vulnerable in our societies, including millions of refugees and others affected by wars, persecution and disasters,” said UN High Commissioner for Refugees Filippo Grandi.

1 All students will not return to school even if social distancing rules are relaxed - McHugh
2 Emily Maitlis thanks BBC viewers for support after Cummings row
3 The human cost of Covid-19: new figures reveal the toll on Ireland's care homes
4 ‘Stick to the guidelines’ - People warned not to gather in crowds as sunny weekend approaches
5 Miriam Lord: Taoiseach is trapped in a Zoom session from hell
Real news has value SUBSCRIBE