Dorothy Duffy from Co. Mayo has written a moving poem about the death of her sister Rose ‘Billy’ Mitchell (nee Duffy) (81) in London from coronavirus, which has been broadcast by the BBC and RTÉ. Audio: RTE Radio/Liveline Photos: Dorothy Duffy 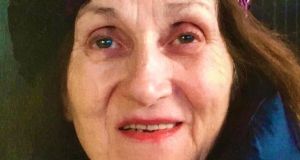 A Co Mayo woman, whose poem about her sister’s death from coronavirus has been broadcast by the BBC and RTÉ, said she wrote it because her sister and others deserved more than to “go quietly”.

Dorothy Duffy, whose sister Rose ‘Billy’ Mitchell (nee Duffy) died aged 81 in a nursing home in London on April 4th, said all she could think in the hours after she died was: “My sister is not a statistic”.

On Tuesday, speaking from her home in London, she read her poem, My Sister is not a Statistic, on RTÉ radio’s Liveline.

It includes the lines: “Tomorrow, when the latest Deathometer of Covid is announced in sonorous tones/ Whilst all the bodies still mount and curl towards the middle of the curve/ Heaped one atop and alongside the other/ My sister will be among those numbers, among the throwaway lines/ Among the platitudes and lowered eyes/ an older person with underlying health conditions/ A pitiful way to lay rest the bare bones of a life.

Ms Mitchell , from Ballina, had emigrated to London when she was 18 to train as a nurse. She left before she completed her training and worked a various jobs, including as a carer. She married aged 26 and had four children who were her “absolute world”, said Ms Duffy.

She told RTÉ she had sat down after her sister’s death and started writing. “It just all poured out...borne of grief and loss and frustration and not being able to be with her children and her grandchildren which we would have been, all together”.

She said she sent to poem to the BBC “on impulse”.

“Afterwards I realised I can’t let my sister go quietly. She deserves more. She deserves lots of people to grieve her and also I was doing it for all the other families up and down the country because their family loved ones, they’re not statistics either. There’s a story behind every one of those losses.”