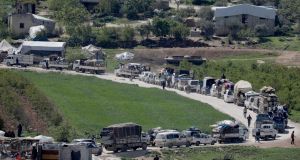 Tens of thousands of internally displaced Syrians are returning to their homes to avoid Covid-19. Photograph: Reuters/Khalil Ashawi

Fearing the coronavirus more than warfare, tens of thousands of displaced Syrians are returning to their homes in the conflict-ravaged northwestern Idlib province.

More than 100,000 Syrians have loaded household goods on to lorries, pick-ups and car roofs and driven to their home towns and villages with the intention of staying put.

Most of the 900,000 displaced by the war in recent months have settled near the Turkish border in overcrowded camps where social distancing is impossible, water for hand-washing is scarce and healthcare facilities are rudimentary. Doctors fear that displaced families could fall victim to an outbreak that could become a humanitarian catastrophe.

There have been no confirmed cases of the virus in Idlib to date.

Half of Idlib’s hospitals and clinics have been destroyed or closed. Reuters reports there is only one laboratory that can test for the virus. So far, it has conducted only 120 tests on 300 samples. Some 5,000 swabs have arrived at the lab but it is is unclear if it can handle this volume or how long processing will take.

Protective gear, sanitising equipment, and medicine are in short supply.

Many returnees regard bombs and bullets as being less dangerous than the virus. They place their hopes in the ceasefire imposed last month by Russia, which backs the Syrian government, and Turkey, which sponsors the armed opposition.

Although there have been minor clashes between government and opposition forces in southern Idlib, the potential for a flare-up of fighting is great. Clashes could erupt between the Syrian army and Turkish troops deployed at a dozen large bases and scores of checkpoints.

It is more likely, however, that battles could take place between jihadi factions, dominated by the al-Qaeda-linked Hay’at Tahir al-Sham, and Turkish forces.

Under the March agreement, Russia and Turkey have pledged to reopen the east-west M4 highway connecting Aleppo city with the port of Latakia and to mount joint patrols along stretches of the strategic highway.

The route bisects Tahrir al-Sham-controlled territory, and the group or its jihadi allies have killed two Turkish soldiers, harassed and kidnapped Turkey’s client paramilitaries and pressed civilians to mount protests along the highway. On Tuesday a judge associated with Tahrir al-Sham was assassinated by an explosive device in Idlib city, the jihadi capital.

Russia has demanded that Turkey corral and disarm the jihadis, a major task Ankara has refused to tackle for more than two years although it has boosted its military presence in Idlib.

As long as Ankara was not interfering with its provincial administration or operations against Syrian soldiers and civilians outside Idlib, Tahrir al-Sham was prepared to coexist with Turkey’s forces. The M4 deal with Russia put an end to this scenario.

Tahrir al-Sham no longer regards Turkey’s military presence in Idlib as a bulwark against the Syrian army and its Russian allies. Turkish troops have even been branded apostates as they do not adhere to the jihadis’ narrow interpretation of Islam.

In the 70 per cent of Syria controlled by the government, 25 Covid-19 cases and two deaths have been confirmed.