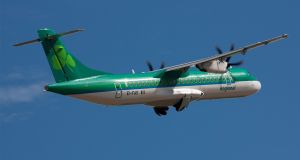 Dublin-based Stobart Air provides craft and crew to fly services under contract to other airlines, including Aer Lingus, for which it operates routes from Britain to the Republic.

Stobart is likely to seek protection from creditors and ask the High Court to appoint an examiner in coming days in a bid to extricate the business from difficulties it faces as a result of the travel bans that have grounded passenger flights.

It is understood that the airline will apply to the court this week, or possibly next, depending on several factors.

Stobart employs 500 people, including pilots, crew and other staff. The airline has a fleet of 19 craft which it leases rather than owns.

The Irish carrier is part of Connect Airways group, whose UK-based airline, Flybe, was placed in administration in late February as the coronavirus’ spread through Europe hit air travel.

Hopes that the British airline could be rescued were dashed earlier this month after administrators, accountants EY, told staff that Flybe could not take part in the UK government’s coronavirus support scheme.

It is understood that Stobart approached potential backers around the time that Flybe went into administration to establish if they would be interested in investing in the Irish carrier.

However, fears of the growing threat that coronavirus posed to aviation put likely investors off getting involved.

Examinership is a court-supervised mechanism used in Irish law that prevents creditors from enforcing debts against troubled or insolvent companies for up to 100 days, to allow them put together a rescue plan.

Companies must demonstrate that they have a reasonable prospect of survival before the courts will appoint an examiner, whose job it is to put together the rescue plan, known formally as a scheme of arrangement.

Stobart Air’s biggest liability is thought to be the lease payments it makes for its aircraft, which sources suggest are about $180,000 (€165,000) a month. However, it was not possible to confirm this as Stobart Air did not comment on Tuesday.

Any rescue deal could involve cutting or restructuring these payments. Examinership law requires that at least one class of creditor agrees to the scheme of arrangement before it is put to the courts for confirmation.

The airline’s contract with Aer Lingus is its biggest business and runs until 2021. Stobart flies passengers from regional airports in Britain, including Birmingham, Edinburgh, Leeds and Manchester, to the Republic, for Aer Lingus, which sells the tickets for the flights, collects the revenue and pays its partner a fee.

Some Stobart services feed passengers to Aer Lingus’s transatlantic flights from Dublin, so are seen as important to the bigger carrier’s long-haul business.

By early 2019, Stobart had flown 10 million passengers on its Aer Lingus Regional services since their launch in 2010. The airline also operates flights for KLM and British Airways.

Stobart Air grew out of the Aer Arann regional service begun by businessman Pádraig Ó Céidigh, which expanded from its original service, flying between the mainland and Aran Islands.

That business itself went into examinership in 2009 as a recession sparked by a collapse in banking and property hit aviation. Stobart Air did not comment on Tuesday.