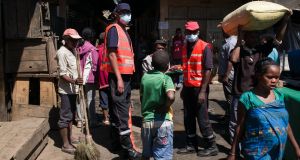 Madagascar is one of the poorest countries in the world, with 92 per cent of the population earning under $2 a day

Near the crest of one of the steep hills dotted across Madagascar’s capital Antananarivo sits a plague hospital. Outside, children play and brick-makers shovel sand, but the hustle of the city’s busier areas is missing. Colourful houses nearby display identical signs on their locked gates. “No standing; no spitting; don’t throw your trash,” they order.

It’s a necessary precaution. The Central Anti-Plague Hospital Ambohimindra is one of six hospitals that treat plague in Antananarivo, and has been placed here because of its relative isolation. This hospital has been open for decades, but 2017 has been the busiest year. Madagascar’s plague outbreak, which began in August, has killed 165 people so far, infecting more than 2,000.

About 400 cases of the bubonic plague, contracted from rats, occur annually on an African island better known for safaris and the eponymous 2005 children’s film, but this outbreak is a rarer crisis. Unusually, another strain of plague has been identified: the deadlier pneumonic plague, which can pass from person to person through coughing, sometimes killing within 24 hours.

The plague has also spread to cities.

Some escaped because they’re afraid of needles. People here are not used to the hospital”

“This is the first time it’s an urban epidemic,” says Dr Marielle Zaramisy, the hospital’s chief of medicine, speaking in her small office from behind a cloth face mask. She’s been working in the hospital for just a month and a half, since the height of the crisis. Her family are worried about her safety. “As a human I’m afraid but I’m following all the precautions. It’s my job.”

Visitors must wear masks covering their mouths at all times. Before entering, shoe soles are sprayed with disinfectant and your temperature is taken with a handheld thermometer. The guards on the door oversee this process, but they also have a more important job to make sure patients don’t escape. At least one inmate got away in October, making it all the way home before doctors forced him back into an ambulance. There have been many other attempts, Zaramisy says. “Some escaped because they’re afraid of needles. People here are not used to the hospital.”

“The problem of plague is not just a medical response. You can have hospitals but if people don’t come it isn’t enough,” said Jean Benoit Manhes, the deputy representative of Unicef.

Adding to public anxiety is a plague of rumours: that the outbreak is a government plot to get donations ahead of next year’s election; if you catch the plague it means you’re dirty; everyone who goes to hospital will die.

Zaramisy says it’s even hard to convince those who are infected of what they have. “It’s all about them not believing what they have despite having symptoms.”

Unicef has put together a team of 12 people just to deal with rumours, while the ministry of health is supporting a 24-hour hotline which is mainly contacted by those who’ve seen misinformation on Facebook.

Despite this, Madagascar’s ministry of health says the outbreak is now under control. When The Irish Times visited CHAPA there were eight patients there, down from 60 three weeks ago. For safety reasons, it wasn’t possible to interview them, though they were visible in the distance, milling around the tents used as wards.

Throughout the outbreak, three people died in this hospital, Zaramisy explains, in each incidence because they waited too long before coming.

Malagasy people traditionally dig up the bodies of their relatives every seven years in a ritual called Famidihana – or the “turning of the bones”. They clean the remains, reshroud them, and rebury them. Sometimes families dance around the remains.

It is not certain how long the plague bacteria lives on in victims of the disease, so the government has banned victims from being buried in family tombs. Instead, they’re being buried in anonymous graves outside the cities. The bodies are placed in sealed body bags by hygienists employed by Unicef and the World Health Organisation, who only allow two family members to witness the process, rather than the dozens that would attend Malagasy funerals in normal circumstances.

“There’s no updated circular on safe and dignified burial yet,” says Manhes, “no one really dares to take responsibility”. The ministry of health is carrying out consultations on how to tackle the problem, though the delay has led to some difficulties.

“There’s been some resistance from the families,” says Dr Lalaina Randriamanantsoa, technical assistant at the ministry of health. “Some family members have gone into hiding.”

For each confirmed case of plague, as many as 20 more contacts have to be treated as a precaution. Those admitted to hospital are given the antibiotics streptomycin and co-trimoxazole, initially injected every three hours. Patients stop being contagious after five days of treatment.

After eight days they leave hospital healthy again, though victims are afflicted by stigma.

“Some people are ashamed once they get out of here. They don’t know can they go out at night, they don’t want to tell their boss because he won’t hug them anymore,” Zaramisy says.

Madagascar is one of the poorest countries in the world, with 92 per cent of the population earning under $2 a day

Madagascar’s “plague season” traditionally runs from October to April, but this year it started in August. Experts suggest that could be due to a number of reasons, including climate change and slash-and-burn farming which causes rats to migrate to populated areas.

Posters warning of the “peste”, as it’s called, are displayed on the walls of government buildings, airports, city offices and shop stalls in rural villages. They show smiling children playing in piles of trash with rats, or women washing clothes surrounded by rubbish. “Clean the house every day and kill the bacteria,” the writing advises.

However, Zaramisy worried some of the messaging falsely suggests plague is a disease of the poor or dirty. “It’s not discerning,” she says. Most prone to the disease are young men aged 20-25, followed by children aged 5-10.

At least 76 medical staff have been infected. The dead include a basketball coach from Seychelles who flew to Madagascar for a tournament.

Antananarivo is a poor city. It’s filled with vintage cars – kept not for love, but because their owners can’t afford another. Children beg for money on the streets alongside minors working as shopkeepers or prostitutes. Crime is rife. All six of the city’s arrondissements have had cases of the plague, including those considered rich areas.

The plague has hit indiscriminately, but poverty has played a role in the death toll. Madagascar is one of the poorest countries in the world, with 92 per cent of the population earning under $2 a day. The average income is less than it was when the country gained independence in 1960.

It’s the uneducated that are least informed about the plague, meaning they won’t present themselves to a hospital if they experience symptoms. Though plague medication is free, the high cost of prescriptions for other ailments also means poor people aren’t used to going to doctors, preferring traditional healers instead.

One of the many Malagasys who expressed scepticism about the plague was Felana (22), who works at a sweet and cigarette stall in the Ambanvouta area of the city. She wasn’t certain the plague even existed. “I don’t know,” she responds, shrugging her shoulders when asked to explain her doubt. Still, the impact on her business is tangible. “People are afraid of plague so no one’s willing to go shopping.”

Lahaina Rakotozafy, a taxi driver, says he is suspicious about the diagnoses by doctors. “They tell everyone they have the plague there.” A small, wiry man, he says he continued working throughout the outbreak though would consider taking precautions, like wearing a face mask, if he came across someone who seemed really sick. “If they’re cured I can talk to them no problem.”

Despite the chaos it has caused in Madagascar, locals and health professionals also say the chance of the plague spreading to other countries is minimal, for the same reason the country remains so poor and underdeveloped: it’s an island.

Manhes, the Unicef deputy representative, sums it up. “Because of its isolation and because of lack of international interest, what happens in Madagascar stays in Madagascar.”