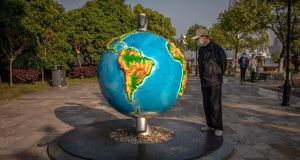 A man wearing a protective face mask stands next to a globe at the riverside park along the Yangtze River, in Wuhan, China. Photograph: Roman Pilipey/EPA

More than 10,000 people have died from coronavirus in New York state since the pandemic began, governor Andrew Cuomo has said.

However, Mr Cuomo said he believed “the worst is over” as hospitalisations appeared to be reaching a plateau while the daily increase in death was the lowest in about a week.

Mr Cuomo, who has been working closely with the governors of New Jersey and Connecticut in response to the novel coronavirus, also said that he would announce a co-ordinated plan on reopening businesses and schools.

French president Emmanuel Macron on Monday announced he was extending a virtual lockdown until May 11th, adding that progress had been made but the battle not yet won.

Acknowledging his country had not been sufficiently prepared early on to face the challenges posed by the outbreak, Mr Macron said the unprecedented restrictions put in place were showing results.

“The epidemic is starting to slow down. The results are there,” Mr Macron said in a televised address to the nation. “Thanks to your efforts, everyday we have made progress.”

“But our country was not sufficiently ready for this crisis. We will all draw all the consequences,” Mr Macron said.

His prime time address came as France ended a fourth week under lockdown, with residents ordered to stay at home except to buy food, go to work, seek medical care or get some exercise on their own.

After a relentless increase until the first week of April, the number of patients in French hospitals’ intensive care units has started to decline, prompting health authorities to call a plateau in the deadly epidemic.

But if French hospitals are just about coping, helped by a massive effort to transfer patients by plane, helicopter or even high-speed train from hospitals in the east and Paris to the west, nursing homes have been overwhelmed.

By Monday, the coronavirus had claimed 14,967 lives in France, the fourth-highest death toll in the world, with more than 98,076 confirmed cases, according to official figures.

The UK reported another 717 deaths in hospitals from coronavirus on Monday.

The department of health and social care said the death toll had risen to 11,329 as of 5pm on Sunday.

British prime minister Boris Johnson was released from hospital on Sunday after a week of treatment for the virus, also known as Covid-19, including three days in intensive care. Downing Street said he would spend some time convalescing in Chequers before returning to work.

A spokesman for Mr Johnson said the government would review the coronavirus restrictions on Thursday as the UK entered its fourth week of effective lockdown.

He told a media briefing: “While Covid-19 accelerates very fast, it decelerates much more slowly. In other words, the way down is much slower than the way up. That means control measures must be lifted slowly, and with control. It cannot happen all at once.

“Control measures can only be lifted if the right public health measures are in place, including significant capacity for contact tracing.

His comments followed reports from China that it had recorded the highest daily rise in cases in nearly six weeks.

China fears a rise in imported cases could spark a second wave of Covid-19 and push the country back into a state of near paralysis.

A total of 108 new coronavirus cases were reported in mainland China on Sunday, up from 99 a day earlier and marking the highest number of cases since 143 infections were reported on March 5th.

The National Health Commission said 98 of the new cases were imported, a new record. A total of 49 Chinese nationals who entered Heilongjiang province from Russia tested positive.

“Our little town here, we thought it was the safest place,” said a resident of the border city of Suifenhe, who only gave his surname as Zhu.

“Some Chinese citizens they want to come back, but it’s not very sensible, what are you doing coming here for?”

Though the number of daily infections across China have dropped sharply from the height of the epidemic in February, China has seen the daily toll creep higher after hitting a trough on March 12th because of the rise in imported cases.

Chinese cities near the border with Russia are tightening border controls and imposing stricter quarantines in response to influx of infected patients from the country.

The land route through the city had become one of few options available for Chinese nationals trying to get into China after Russia stopped all flights to the country.

Suifenhe and Harbin, capital of Heilongjiang, are now mandating 28 days of quarantine for all arrivals from abroad as well as nucleic acid and antibody tests.

The spread of coronavirus in Spain is continuing to slow down as it started tentative moves to ease its shutdown. Spain allowed workers in some non-essential industries to return to factories and construction sites on Monday.

Some 517 new deaths were recorded overnight, while the number of infections logged was the lowest in more than three weeks, at nearly 3,500.

The Spanish health ministry figures bring the overall death toll from the pandemic in the country to 17,489 and the total positive cases to 169,496.

Heavy industry and construction workers returned to work on Monday after a two-week hiatus in economic activity, but the government is keeping most Spaniards under confinement for the fifth week in a row.

Retail stores and services are still required to stay closed, and the government is strongly encouraging office workers to keep working from home.

Some health experts and regional politicians argue that it is premature to ease any part of the lockdown order.

Police in Madrid handed out face masks to the few commuters taking public transportation to work in the early hours of Monday.

The Southeast Asian island nation, which is under partial lockdown to try to curb a recent surge in infections, also reported its ninth death from the disease.

A large number of the new cases are linked to outbreaks in migrant workers’ dormitories. Singapore has quarantined thousands of workers in dormitories after they were connected to several cases of the Covid-19 respiratory disease.

To date, a total of 586 people have fully recovered from the infection, the health ministry said.

Meanwhile, South Korean officials have warned that hard-earned progress fighting the coronavirus pandemic could be hit by new infections at bars and leisure spots, highlighting global tensions between governments keen to maintain social distancing and citizens eager to resume their lives as economic pressure mounts.

South Korea’s caseload has slowed from early March, when it was reporting around 500 new cases a day, but officials have warned of a broader “quiet spread”, pointing to transmissions at locations such as bars that may indicate eased attitudes towards social distancing.

South Korean prime minster Chung Sye-kyun said officials were discussing new public guidelines that would allow people to engage in “certain levels of economic and social activity” while also maintaining distance to slow the spread of the virus.

Social distancing was still on full display for Easter Sunday celebrations around the globe, with many Christians marking the day isolated in their homes while clergy preached to empty pews.

St Peter’s Square at the Vatican was barricaded to keep out crowds, while one Florida church drew a large turnout for a drive-in service in a car park.

On the hopeful side, officials said Italy recorded the lowest number of virus deaths in three weeks, with 431 people dying in the past day to bring its total to around 19,800.

But while attention has focused on the US and southern Europe, new coronavirus hot spots have been emerging in Japan and Turkey.

Japan, the world’s third-biggest economy, has seen its number of new cases climb rapidly in recent days and now has 7,255 confirmed cases of the virus.

Japanese companies have been slow to switch to remote-working and people are still commuting, even after a state of emergency declaration for seven prefectures, including Tokyo.

More than 1.8 million infections have been reported and more than 114,000 people have died worldwide, according to Johns Hopkins University. – Agencies