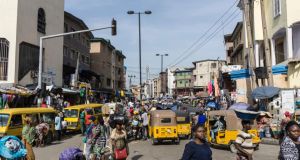 People walk through Balogun market in streets around Lagos Island. Lagos is the world’s 10th largest city with between 17 and 22 million people, although no-one seems to be counting. Photograph: Stefan Heunis/AFP/Getty

Tech workers in Nigeria have launched a campaign calling on the police to stop arresting and “extorting” them, saying carrying a laptop is enough to have them falsely accused of being scammers.

A hashtag, #StopRobbingUs, has been trending on Twitter in Nigeria since shortly after the arrest of Akinmolayan Oluwatoni, a developer who says he was detained by the Special Anti-Robbery Squad for carrying a laptop and iPhone, and ordered to pay 1 million naira (€2,500) to be released. The money has since been returned, according to campaigners, but they say this was not an isolated incident.

“I stopped carrying my laptop in Lagos for two reasons,” tweeted Nigerian Ajiboye Asher. “Firstly, I might be robbed by thugs. Secondly, I might be waylaid by the Special Anti-Robbery Squad and branded a ‘Yahoo’ boy. They are both criminals looking for a way to make off with the belongings of innocent citizens.”

The Nigerian police did not respond to multiple requests for comment.

Bosun Tijani, chief executive of the Co-creation Hub (CcHUB) in Lagos, told The Irish Times tech workers were fed up and demanding an end to “extortion”.

“It has been going on for years but now [it’s] more targeted at tech workers who by default would have their laptop and smartphones on them.”

Mr Tijani said the problem was “rampant” and the police would demand “whatever they can milk from you”, once they realised you had money.

“They go as far as asking people to open their mobile banking app. They typically will start [demanding] a ridiculous amount [of money]has a reputation for being a home to online scammers. In August, the US Federal Bureau of Investigation (FBI) indicted 80 people – 77 of them Nigerians – who it accused of being involved in what it called the “largest case of online fraud in US history”. One of them was businessman Obinwanne Okeke, the head of Nigeria’s Invictus Group company, who was formerly named on the Forbes “30 under 30” Africa list.

Scammers in Nigeria are nicknamed “yahoo boys”, because of the number of email scams originating from the West African country, which target people across the globe.

However, Mr Tijani says the legal tech industry is booming too. “Nigeria is a strategic country in Africa for tech investment, but social issues of this nature is putting a strain on the talent pool, and tech is a talent heavy industry with global competition for talent,” he said.

“We are seeing more engineers leaving the country and this amongst a few other things are the reasons being given. To sustain our industry, we need the government to act.”