‘Liberate Hong Kong’: Voices of the people echo throughout city

Once widely praised for order and efficiency, city is now bitterly divided by violence and politics 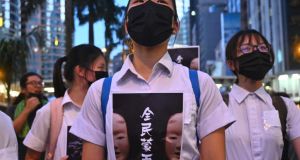 High school students chant slogans as they stick posters reading ‘all people masked’ on their uniforms as protesters gather in the heart of Hong Kong’s commercial district on Friday. Photograph: Philip Fong/AFP via Getty

A final at an inter-schools swim meet in Hong Kong this week came to an unusual conclusion. The crowd in the arena roared the swimmers on as they ploughed towards the finish – and then abruptly, a few strokes from the end, they all stopped.

Echoes faded into a confused silence. The teenage boys stood up in the pool, ramrod straight, and together they sang: “May glory be to Hong Kong, for the tears that we shed on this soil.”

By the time they got to the third line the crowd worked out what was happening and joined in, singing, “For the anguish we had in this turmoil . . .”

There were no medals awarded, or personal bests achieved, but the sounds of the Hong Kong protest movement’s adopted anthem shook the arena.

The police go on the offensive: sprinting at the frontliners, brandishing batons, and subduing and zip-tying the laggards

Similar scenes played out this week on the city’s famous Star Ferry, which has been shuttling passengers across Victoria Harbour between Hong Kong Island and Kowloon since 1888.

As one ferry was pulling out on the island side, people aboard chanted “Liberate Hong Kong”. Across the water from an incoming ferry then came the shout: “Revolution of our times”, as they finished the slogan. The passing ships then engaged in a fleeting duet.

From the middle of the harbour, staining the stunning vistas were multiple plumes of smoke wafting up through the skyscrapers at the foot of the steep hills, evidencing tear gas, petrol bombs and bonfires in the fray.

This is where we are, four months after protests against an extradition Bill morphed into a wider call for more democratic rights, and now a violent stand-off that is ripping Hong Kong asunder.

Back on the island, on a footbridge in the smouldering thick of it, a group of about 40 riot police were facing off against a seething mob below. On the periphery was a group of journalists, a couple of elderly hawkers, and a middle-aged woman fearing for her son below.

“I can’t stop him from joining the protests,” she said, “but he promises me he doesn’t join the frontlines.”

The woman, who said her family name was Lau, said she comes to all the protests and stays in the background waiting. He texts her every so often to say he is okay.

If someone says something [the protestors] disagree with they beat them and threaten to kill them. They are bullies and the dictators!

“I can’t stay at home when he is out there, it’s better to be here,” she said, wondering aloud who will bring the chaos to an end. “I haven’t been able to sleep properly for months.”

Shielded behind umbrellas, boogie boards, and other makeshift shields, the protesters try to storm the police’s position – two-by-two, running up an escalator – in the face of a barrage of bean-bag rounds, rubber bullets and dense clouds of noxious gas.

After most efforts like this they are driven back, dry-retching and gasping. Occasionally they break through the police ranks and flail at them with boots and sticks and whatever else they have to hand.

Periodically, the police go on the offensive: sprinting at the frontliners, brandishing batons, and subduing and zip-tying the laggards.

In the elaborate cat-and-mouse games, they try to hem a group of protesters in to make mass arrests. The demonstrators, with their Bruce Lee “be water” mantra, keep it fluid.

On Sunday, one large group of protesters had walls of police moving in from both sides. Shops were all shuttered, and subways blocked, so it looked to all like a night in a cell was beckoning. But then a local resident opened a door and ushered them into his apartment building.

With a helicopter hovering low overhead, and police boots stomping by outside, scores of demonstrators huddled in silence in the stairwell. Several minutes later the door was creaked open and the elderly man waved them back out on to the empty street.

While the protesters take acts like this as indications of the widespread grassroots support for their movement, there is also plenty of opposition in the city to their violent actions.

Clashes are becoming commonplace, often at the omnipresent “Lennon Walls”, where the pro-democracy side stick slogans and posters supporting their campaign. Opponents have been ripping them down around the city and violence often ensues. Pro-Beijingers who have waved Chinese flags or condemned the protests have been attacked regularly in recent weeks.

“I think they can be like hypocrites,” said Lucy, a mainland Chinese student in a Hong Kong university. “They say they are pro-democracy and for human rights, but if someone says something they disagree with they beat them and threaten to kill them. They are bullies and the dictators!”

In elections here in recent years, the pro-Beijing parties have consistently topped the polls, though the pan-democratic parties believe they will gain significant ground next time around now the youth have been mobilised.

Alvin Lim, a software designer, supports the main pro-Beijing party, whose offices have been vandalised more than a dozen times since the protests began.

“They [the protesters] make the most noise, but there are so many people like me who disagree with them, who think we need to co-operate closely with China to develop economically. We need to be clever and play their game,” he said.

Hong Kong is a bitterly divided city. For decades it was widely lauded for its orderliness, efficiency, safety and respect for rule of law. Now, with streets often aflame, and more than 2,000 arrests and 1,100 serious injuries later – between protesters and police – it can portray a very different image at times.

The police – the much derided and despised police – were long celebrated as “Asia’s finest”. Their headquarters in Wan Chai, surrounded now by giant barriers, has taken a battering over the past 17 weeks. Inside, a senior police officer gives a deep sigh.

“How did we get to this point? Who knows? A long story.”

He denies any allegations of police brutality, saying hundreds of his colleagues were seriously injured over the past four months in the clashes.

“It is not about their politics, or their demands. But our job is to uphold the law. If they don’t break the law, we will leave them alone,” he said. “And when people come to attack you – to really, really hurt you, or worse – you have to defend yourself.”

The hostility between the police and protesters is intense. As they come face to face the protesters scream “pigs”, “black cops” and “triads”, while the police spit back: “cockroaches!”

A teenage protester lies in a nearby hospital, miraculously still alive after a police bullet skimmed his heart this week. The protesters believe Beijing is intent on chipping away their remaining freedoms; they have zero faith in Carrie Lam’s administration, and scorn her and her initiatives. Upcoming district council elections at the end of November will further stoke tensions. The atmosphere is febrile and the streets are very soon, no doubt, to become battlegrounds, once again.

The police can offer no solution to the impasse, the officer said. They will leave that to the politicians.

“We just have to be ready for a long, hard road.”