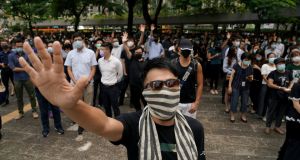 Hong Kong’s leaders invoked colonial-era emergency powers on Friday to ban the wearing of face masks at protests, but the move aimed at quelling the unrest only served to spark defiance and prompted violent rampages across the beleaguered city.

A 14-year-old boy was shot in the leg in one of the many clashes that erupted in the hours after the ban was announced.

Under the law, people who wear surgical masks, gas masks, and other materials such as face paint at public assemblies – whether the gatherings are approved by the government or not – would face a prison term of up to one year and a fine.

The order was made under the Emergency Regulations Ordinances, a 1922 provision that allows the chief executive to bypass the legislature and make any law of their choosing during times of emergency or public danger.

“Violence is destroying Hong Kong, ” chief executive Carrie Lam said, “we can’t leave the situation to get worse and worse”.

Ms Lam denied that the move was a major step towards authoritarianism for Hong Kong, which under the “one country, two systems” framework is guaranteed freedoms not enjoyed on the Chinese mainland. She did not rule out introducing further laws under the emergency provisions if the violence worsened.

Prominent activist Joshua Wong was one of the many who immediately condemned the government’s decision to invoke the colonial law.

“No doubt, Hong Kong has fallen into a police state,” he said. “World leaders should act now and stop a brewing humanitarian crisis.”

The Progressive Lawyers Group said on Friday the legislation was “non-compatible with modern notions of civil liberties and rule of law . . . Its vagueness confers enormous discretionary powers to the executive branch, which in turn makes it open to abuse.”

The government hoped the new law would have “a deterrent effect”, but as soon as it was announced masked protesters took the streets and started to wreak havoc all across the city.

In Yuen Long, a 14-year-old boy, suffered a gunshot wound to the thigh in a clash with police. In a statement, the police force said an officer had opened fire with a live round when he was attacked by protesters. Video footage posted online showed an officer at the scene being beaten by a mob and dropping his gun as he was hit by a petrol bomb. He later retrieved his gun and escaped.

Protesters ransacked the city’s metro system, which shut down all services on Friday evening for the first time since the pro-democracy demonstrations started four months ago. The rail operator said they made the decision after a large number of stations were vandalised and subjected to arson.

Government offices, state-owned banks and pro-Beijing retail outlets were also attacked, and roads were barricaded in districts all across the city.

Chinese state media quoted a Beijing spokesman for Hong Kong affairs on Friday night saying “the chaotic situation in Hong Kong cannot continue”, and that it was now time “to end violence and chaos with a more clear-cut attitude and more effective measures.”