‘We do not understand the virus fully,’ says Macron as state of medical emergency reinstated 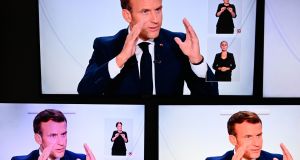 France will enforce a 9pm-6am curfew starting on Saturday in nine zones on high alert against the Covid-19 virus, President Emmanuel Macron announced on Thursday night.

The curfew will continue at least until December 1st.

Earlier in the day, Mr Macron presented a decree in cabinet reinstating the medical state of emergency, which was declared last March 23rd and lifted on July 9th.

Public transport and taxis will function during curfew hours, and people will be authorised to work at night if necessary. Those out of doors without reason after 9pm will be fined €135 for the first offence, €1,500 for subsequent offences.

“We are in the second wave,” Mr Macron said. “The virus is circulating everywhere in Europe. Germany is taking measures. The situation in Spain and the Netherlands is worse than here.”

Mr Macron said 90 per cent of 33,037 coronavirus fatalities in France have been people over the age of 65. At present, more than half the patients in intensive care units are under age 65.

Some victims suffer long-term cardiac, digestive or other effects, Mr Macron said. “We do not understand the virus fully. It is dangerous and serious for everyone. At the moment, we are seeing 20,000 new cases daily. Each day, another 200 citizens enter intensive care units.”

Mr Macron said his objective is to lower the number of new cases to between 3,000 and 4,000 daily. “That we could handle,” he said.

One-third of beds in French ICUs are now occupied by Covid patients, which is creating unbearable pressure, Mr Macron said. Last spring, the virus was limited geographically and patients could be transported to less-affected regions, he said.

“Today, the virus is everywhere in France. There are no hidden reserves,” Mr Macron said. “Our medical staff are exhausted. We have no beds in reserve. That is why we must take the most strict measures . . . We hear people saying, ‘Don’t take away my freedom.’ We are a nation of citizens. If I don’t put the brakes on, I put my father, mother and siblings in danger.”

Mr Macron said working remotely was pleasant for those with country houses, but difficult for people in small apartments with children. Ideally, people should work remotely two or three days a week, to ease traffic and pressure on public transport.

Mr Macron defended himself against charges that his strategy has infantilised citizens. “We are all actors in this battle against the virus,” he said. “We need common rules. That is not infantilising. All our neighbours are doing it.”

In the run-up to the November All Saints holidays, there had been concern that travel might be limited within France. It will not.

“Asking people to stay at home and not take holidays would be disproportionate,” Mr Macron said, asking citizens to observe the same precautions – face masks, social distancing and refraining from gestures of affection – when they visit relatives. He also advised them to ventilate closed spaces for 10 minutes three times daily, and to obey the “rule of six”.

Mr Macron expressed sympathy for French youths. “It’s tough to be 20 years old in 2020,” he said. The young have had exams cancelled. They are anxious about training, about finding their first jobs. “It’s normal to party with friends when you are young. For a few weeks or months, we’re asking them to see less of each other.”

Mr Macron said France now conducts between 1.2 and 1.4 million Covid-19 tests daily. He acknowledged there have been long waits for tests and results, but said that is about to change because new tests will provide results in less than half an hour, and there will eventually be home test kits, similar to those for pregnancy.