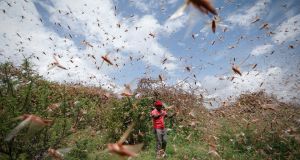 A man chases away a swarm of desert locusts in the bush near Enziu, Kitui County, Kenya, January 24th 2020. Photograph: Dai Kirokawa/EPA 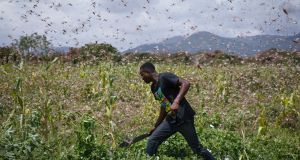 A farmer wades through a swarm of desert locusts flying over maize crops in a farm in Enziu, Kitui County, some 200km east off Nairobi. Photograph: Dai Kurokawa/EPA

The worst desert-locust infestation in Kenya in 70 years is threatening to spread further into East Africa, jeopardising food security.

Swarms of the insects are already devouring crops and pasture in Ethiopia and Somalia, and they are breeding in Djibouti, Eritrea and Sudan – all areas prone to drought and food shortages. There is a high risk they may soon enter northeast Uganda and southeast South Sudan, the United Nations’ Food and Agriculture Organisation (FAO) said Friday.

“We must act immediately and at scale to combat and contain this invasion,” said David Phiri, the FAO’s sub-regional co-ordinator for eastern Africa. “As the rains start in March there will be a new wave of locust breeding. Now is therefore the best time to control the swarms and safeguard people’s livelihoods and food security.”

The East Africa region already has high levels of food insecurity, with more than 19 million people facing hunger because of drought and flooding, according to the FAO. The agency warned on January 20th that, left unchecked, the number of desert locusts could grow 500 times by June, with recent weather in East Africa favouring rapid locust reproduction.

In Kenya, the locusts have mainly ravaged pasture, putting livestock production at risk, Hugo de Groote, an agricultural economist with the International Maize and Wheat Improvement Center, said by phone. There is a need to monitor and control the insects to ensure swarms do not reach the more southerly counties that grow corn, tea and coffee, he said.

Kenya is the world’s biggest producer of black tea.

Agriculture minister Peter Munya said the government has intensified aerial spraying in the north of the country to combat the swarms, including in the county of Marsabit.

“The locusts have affected the entire county,” Jaldes Dima, the chief officer in charge of agriculture in Marsabit, said by phone. “It has mostly affected pasture. Thankfully, farmers had already harvested food crops. The challenge is that the effects of the locusts invasion is likely to be felt in future.”–Bloomberg