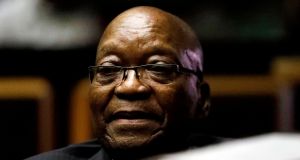 Former South African president Jacob Zuma has accused the inquiry of being ‘prejudiced’ against him. File photograph: EPA

Former South African president Jacob Zuma is scheduled to appear before a commission of inquiry on Monday that is tasked with investigating whether he and other government officials were involved in public sector corruption.

Mr Zuma, who was removed from office by the ruling African National Congress (ANC) party in February 2018, has been accused by whistleblowers of bribery, facilitating tender fraud, and using his influence as president to bypass official regulations.

Speaking to South Africa’s state-run broadcaster the SABC on Friday, Mr Zuma confirmed he would attend the Commission of Inquiry into State Capture, Corruption and Fraud in the Public Sector in Johannesburg at the start of this week.

Inquiry officials have set five days aside for his appearance, but it is not clear yet if Mr Zuma has agreed to testify and answer questions.

“I was called by the commission to come ‘say my piece’ ,” he told the SABC in isiZulu, his tribal language, “so we will meet there and we will see how it goes”.

In 2016 the then public sector ombudsman, Thuli Madonsela, recommended the inquiry be established after she had investigated if South Africa’s controversial Gupta business family had undue influence over Mr Zuma as president.

After Mr Zuma was removed from office, his successor, Cyril Ramaphosa, appointed deputy chief justice Raymond Zondo to investigate the different allegations of corruption made against his ANC comrade and whether government had been “captured” by private sector interests.

Since the inquiry began hearing evidence in June last year, Mr Zuma and many of his former government ministers have been implicated in wrongdoing and corruption by different whistleblowers.

What are the alleged offences?

For instance, former public enterprises minister Barbara Hogan alleged Mr Zuma interfered with the appointment of senior officials to the state’s transport company, Transnet, which has subsequently become embroiled in a number of tender fraud scandals.

In addition, he is accused of illegally facilitating the Guptas to land a plane with more than 100 of their wedding guests from India at a military air force base in South Africa, and of allowing the business family to influence some his ministerial appointments.

The former president, who is also scheduled to face corruption charges at a trial later this year linked to a multibillion-rand government arms deal, has always maintained he never allowed private sector businesses to influence his decisions.

He has accused the inquiry of being “prejudiced” against him and even said the entire investigation was part of a political conspiracy designed to end his career, and that it was hatched by a faction in the ANC bent on his demise.

Since last April the inquiry has called on Mr Zuma to appear before it. In turn, the former president has asked the inquiry to first provide him with the questions they want to ask, which it has refused to do.

Hundreds of Mr Zuma’s loyalists from his home province of KwaZulu-Natal are expected to attend the inquiry on Monday to provide a show of support.