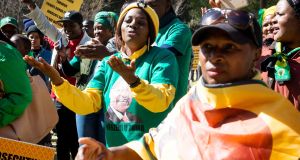 Johannesburg: Supporters of former president Jacob Zuma gather at the end of the fourth day of his testimony during the commission of inquiry into ‘state capture’. Photograph: Yeshiel Panchia/EPA

Up to 100 small farmers in South Africa were conned into participating in a rural economic empowerment scheme that ended up lining the pockets of corrupt businessmen, according to evidence heard at an inquiry this week.

Ephraim Dhlamini, one of the project’s intended beneficiaries, told the inquiry on Tuesday that in 2012 the farmers were promised dairy cows and training in India by the Free State provincial legislature’s then agriculture minister, Mosebenzi Zwane, if they bought a stake in the initiative.

However, within a few years of the project beginning in 2013, Mr Dhlamini said, it became clear they had been sold nothing but “a pipe dream”, as the animals and training the farmers had been promised never materialised.

The story of public sector corruption that Mr Dhlamini told during his two days on the witness stand was the latest to be aired as part of the much broader “state capture” inquiry that has been sitting in Johannesburg since last August.

Chaired by deputy chief justice Raymond Zondo, it has been tasked with investigating if the controversial Gupta business family and members of the ruling African National Congress were involved in public sector corruption during former president Jacob Zuma’s nine years in office.

Mr Dhlamini told the inquiry that not only had the farmers not been given the promised dairy cows, they had also been told that members of Mr Zwane’s local church choir had gone on the training trip to India, one of the world’s largest milk producers, instead of them.

“The youngsters [in the choir] told us,” Mr Dhlamini responded when asked how he knew the singers had gone on the trip, before adding: “They said they were trained on dairy farming for a few days there ... They didn’t stay long because they got sick from the spicy Indian food there.”

Hundreds of millions of rand in taxpayers’ money that was meant to support farmers such as Mr Dhlamini was reportedly channelled into the dairy project, which operated on a farm that was gifted to the Guptas’ Estina company by the provincial government.

This money was allegedly then transferred via Dubai to bank accounts controlled by Gupta-owned businesses, according to evidence found in thousands of emails leaked from the men’s own company server in 2017.

In addition, the leaked emails revealed last year how at least 30 million rand (€1.9 million) of the money that was siphoned off ended up funding a lavish wedding the family held at the Sun City resort near Pretoria in 2013.

Mr Zwane, who went on to become South Africa’s mineral resources minister during Mr Zuma’s second term in office, has denied any wrongdoing and maintained he knew nothing of Ajay, Atul and Rajesh Guptas’ involvement in the project.

The Guptas, who left South Africa to live in Dubai shortly after Mr Zuma was removed from office in February 2018, have also said their involvement in the project was above board.

Mr Dhlamini said that when it became apparent the dairy project was potentially a scam, the situation became dangerous for those who spoke out about what was happening.

He said one of the farmers who was most vocal about the scandal was murdered, while others – including himself – had received death threats. But when the local authorities were approached to investigate the threats, they refused to, he claimed.

On Monday, the Democratic Alliance party’s leader in the Free State legislature, Roy Jankielsohn, who was the first person to make an official complaint about the project, told the inquiry its intended beneficiaries were effectively excluded from it after being brought on board.

He also outlined how the national government donated tractors that were never used, but they were instead sold by provincial officials. The Free State government then went on to spend 2.3 million rand (€148,000) on two new tractors for use at Estina’s dairy farm.

Furthermore, 1.2 million rand (€77,000) in public funds was used to buy offices for Estina in Vrede, Mr Jankielsohn said, and the Guptas’ company then went on to sell the work space to a private individual for 1.3 million rand (€83,000).

He also told Mr Zondo, the inquiry chairman, that the Free State government was still funding the dairy project to the tune of 20 million rand (€1.3 million) a year. In his view this was to ensure it was not seen as a failure.

“I don’t think that the government wants to acknowledge that,” he said.