British prime minister Boris Johnson says that the Northern Ireland backstop needs to be abolished if there is to be a Brexit agreement between the UK and the EU. Video: UK Parliament TV 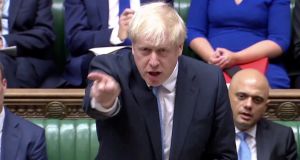 Boris Johnson used his first House of Commons statement as prime minister on Thursday to demand the complete removal of the so-called Irish backstop as the key objective in future Brexit negotiations with the EU.

Surrounded by members of the new, far more pro-Brexit cabinet formed in a brutal reshuffle on Wednesday, Mr Johnson insisted he would accept no version of the Northern Irish backstop, which will tie the UK to Europe’s customs arrangements until a long-term trade deal can be agreed. The EU has insisted the backstop is vital to avoiding a hard border on the island of Ireland.

Mr Johnson told the Commons that the current terms of the withdrawal agreement – negotiated by Theresa May, his predecessor, and rejected three times by parliament – were “unacceptable”.

The new prime minister’s hard line appears to increase the risk that the UK and EU will be unable to reach agreement on the terms of the UK’s withdrawal in time for October 31st, the scheduled date for the country’s departure.

There had been speculation that the two sides might be able to find a compromise, in which a time limit would be imposed on the backstop.

“No country that values its independence and indeed its self-respect could agree to a treaty which signed away our economic independence and self-government as this backstop does,” Mr Johnson told the Commons.

“A time limit is not enough. If an agreement is to be reached, it must be clearly understood that the way to the deal goes by way of the abolition of the backstop.”

Mr Johnson appeared in the Commons shortly after his first cabinet meeting, at which he told his new team that preparations for a no-deal exit would be ramped up.

Speaking on Thursday in Glencolumbcille, Co Donegal, Taoiseach Leo Varadkar said a no-deal Brexit “is a British threat” and that without the backstop, there would be no free trade deal between the EU and the UK.

“The only people who can cause no-deal are the British government. And while I’m not going to speak to prime minister Johnson over the airwaves, I look forward to meeting him in early course. What I can say is that the position of the European Union and the position of Ireland has not changed,” he said.

Asked if Mr Johnson was bluffing, the Taoiseach replied: “I don’t know.”

Wednesday’s ruthless cull of Mrs May’s team meant there were many new faces around the cabinet table, including Dominic Raab and Priti Patel, two prominent Eurosceptics who have been appointed foreign secretary and home secretary respectively.

Michael Gove, who moves to the cabinet office to oversee no-deal planning, and Andrea Leadsom, business secretary, were among the other senior Brexiters to take top jobs. Sajid Javid, a rare former Remainer in one of the top roles, became chancellor.

Mr Johnson told the Commons that he and Stephen Barclay, who has kept his job as Brexit secretary, would throw themselves into renegotiations “with the greatest energy and determination and in the spirit of friendship”.

“I hope that the EU will be equally ready and that they will rethink their current refusal to make any changes to the withdrawal agreement,” he added.

However, he accepted that, if the EU maintained its current stance, the UK would have to leave the EU without an agreement, and with “as little disruption as possible to our national life”.

Nick Boles, a former Tory minister who now sits as an independent MP, told the BBC’s Today programme that the Conservative party had now been “fully taken over top to bottom by the hard right”.

He added: “The few elements remaining of the liberal one-nation Conservative style are neutered captives in this cabinet”.

As well as setting out his negotiating demands, Mr Johnson restated many of the policy announcements he made on Wednesday when entering Downing Street, including plans for 20,000 new police officers, the “upgrade” of 20 hospitals and a boost to school funding.

On Thursday, he added that he was seeking a “radical” overhaul of immigration policy, modelled on Australia’s system. Mr Johnson said: “I am convinced that we can produce a system that the British public can have confidence in.”

Responding to Mr Johnson’s statement on Thursday, Labour leader Jeremy Corbyn said that nobody underestimated the UK. But he went on: “The country is deeply worried that the right honourable gentleman overestimates himself.”

Mr Johnson is likely to face opposition on his own benches, especially after his cull of 15 of Mrs May’s cabinet.

Philip Hammond, former chancellor, is expected to lead opposition to a no-deal exit when the Commons returns in September. If Mr Johnson fails to secure a deal in Brussels that he can sell to parliament and cannot execute a no-deal exit, a general election could swiftly follow.

Many Tory MPs are bracing for an election in October – when Mr Johnson might seek a mandate for a no-deal exit, possibly with the support of Brexit party leader Nigel Farage – or a post-Brexit poll in the first half of 2020.– Copyright The Financial Times Limited 2019