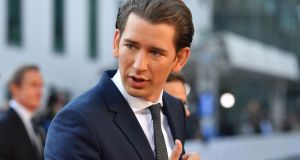 The re-election campaign of Sebastian Kurz, Austria’s political wunderkind, has hit turbulence as he is dragged into a scandal over a secret video and shredded hard drives.

Mr Kurz became Austria’s youngest ever chancellor in 2017, heading a coalition between his conservative People’s Party (ÖVP) and the far-right Freedom Party (FPÖ). But his government collapsed in recrimination in May after a secretly-recorded video emerged of FPÖ leader Heinz-Christian Strache apparently promising political favours for party donations.

The video was recorded in a summer house on Ibiza in the summer of 2017, before that year’s general election. Mr Kurz said he only was made aware of it shortly before it was made public and that he saw it for the first time with everyone else, when excerpts appeared online.

Now it has emerged that, six days after the video became public and four days before his coalition collapsed, an aide to Mr Kurz brought five hard drives to be destroyed at a specialist company in Vienna.

The man gave a false name and address and did not pay the bill of €76; by chance, an employee of the shredding company later saw the mysterious customer on television, standing beside Mr Kurz.

Police began an investigation and, aided by a reverse search of the mobile number he gave the company, found their man. He has been identified publicly only as Anro M, responsible for Mr Kurz’s social media presence, which is seen as a crucial part of his political success.

A fuzzy surveillance video has emerged showing him at the company. Employees remember how he supervised the shredding personally and insisted the shards of the destroyed hard drives were sent through the shredder a second and a third time.

That the drives were destroyed just as the Ibiza affair was emerging has prompted speculation in Austria that they contained data that might call into question Mr Kurz’s version of events.

Mr Kurz has denied this, saying there was nothing unusual in destroying sensitive data ahead of a looming change of administration.

Austria’s acting chancellor Brigitte Bierlein has confirmed that “deleting of particular sensitive data not covered by archive laws is the usual practice during a change of government”.

Nevertheless the hard drive episode is now part of a criminal investigation that has seen prosecutors probe the financial affairs of all major political parties.

In the secret video, Mr Strache is heard explaining to a woman, posing as the niece of a Russian oligarch, how to get around Austrian campaign finance laws and donate large sums to his party.

Karl Nehammer, ÖVP secretary general, has said the devices destroyed were hard drives which temporarily save files sent for printing. It could not be ruled out that sensitive or strategic party data was on the disks, he said. They had to be destroyed, he added, in case chancellery civil servants loyal to the opposition Social Democrats (SPÖ) leaked the information.

“I think that trust is good but control is better,” said Mr Nehammer.

The Kurz aide was wrong to use a false name, he admitted, but acted as he did to avoid linking the chancellery to the hard drives ahead of the no-confidence vote.

The affair is the latest indication that Austria is facing into a dirty snap election campaign, with growing nervousness in the Kurz camp. A recent poll, taken before the hard drive affair, gave the ÖVP a comfortable lead on 37 per cent, 15 points ahead of the SPÖ.

The poll, for the Österreich tabloid, suggested one likely postelection option could be a ÖVP coalition with the Austrian Greens.