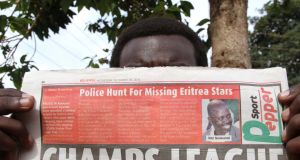 Recurring issue: a newspaper in Kampala carries a report on Eritrean footballers who disappeared from a hotel they were staying in the Council for East and Central Africa Football Associations in 2012. Photograph: Isaac Kasamani/AFP/Getty

Five members of Eritrea’s under-20s football team have disappeared in Uganda, making them the latest of dozens of football players who have used tournaments abroad to escape the secretive dictatorship.

The players were staying in a hotel in Jinja, southern Uganda, and were due to play Kenya on Thursday in the semi-finals of the Council of East and Central African Football Associations (CECAFA) cup.

Although their head coach Haile Efrem Alemseghed initially suggested the players were unwell, the tournament’s chairman later confirmed they were missing.

“We have decided to beef up security around their hotel and the team so that we end the tournament on a good note,” CECAFA chairman Aimable Habimana told local media.

Eritrea is a small country in the Horn of Africa, with a population of less than six million. There hasn’t been an election since independence in 1993 and its citizens are forced to participate in mandatory, unending national service, something which has been repeatedly condemned by the United Nations and human rights groups.

In 2012, 17 Eritrean football players and officials escaped during a tournament in Uganda

National service is one of the reasons why huge numbers of Eritreans escape the country, risking being shot on sight at the border when fleeing to neighbouring Ethiopia or Sudan. More than half a million refugees from the country have now been registered, making Eritrea the world’s ninth largest source of refugees, according to the UN.

Helen Kidan, who works with the Eritrean Movement for Democracy and Human Rights (EMDHR), said the organisation is on standby to help the escaped footballers in Uganda. EMDHR previously helped 10 other Eritrean footballers get legal representation, after they refused to return to Eritrea from Botswana in 2015, she added.

Life can be a struggle for escapees at the start, according to Ms Kidan, even when they are certain they made the right decision. In Botswana, refugee camp conditions were poor and the players weren’t happy, she said. Some of them were later resettled in the US.

Ms Kidan explained that there can also be punishments for the families of those who defect, back in Eritrea. “The regime utilises threats, financial penalties and even incarceration of family members,” the EMDHR spokeswoman said.

The New Yorker magazine previously reported that some Eritrean national team football players’ families were made to sign over their house deeds in advance of away games and tournaments.

In 2012, 17 Eritrean football players and officials escaped during a tournament in Uganda – 15 of them, including the team doctor, were granted asylum the following year.

During the CECAFA tournament in Tanzania in 2010, 13 Eritrean players defected, while the entire national team, which is known as the “Red Sea Boys”, fled in 2009, after a tournament in Kenya. Six players escaped in Angola in 2008, following the Africa Cup of Nations.