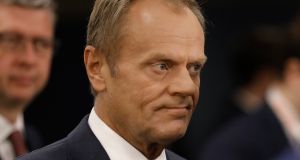 European Council president Donald Tusk has said the EU stands “fully behind Ireland” after the UK published its new Brexit proposals, adding in a tweet that the union remains “open but still unconvinced” by the UK plans.

Separately, MEPs warned that there is not nearly enough in the UK proposals for a deal they could endorse. The cross-party European Parliament Brexit Steering Group (BSG) said in a detailed response to the proposals that they do not “even remotely” amount to an acceptable deal.

“Safeguarding peace and stability on the island of Ireland, protection of citizens and EU’s legal order has to be the main focus of any deal,” it said in a statement. “The UK proposals do not match even remotely what was agreed as a sufficient compromise in the backstop.”

“The proposals do not address the real issues that need to be resolved if the backstop were to be removed, namely the all-island economy, the full respect of the Good Friday [Belfast] Agreement and the integrity of the single market, “ the statement say.

The MEPs, who will be asked to vote on any deal before it can be approved, pointed to two key elements of the British proposals as particularly problematic – the so-called Stormont lock, and the insistence by the UK that the North would leave the EU customs union and the consequent necessity for customs controls.

“The right of consent being offered to the Northern Irish assembly effectively makes an agreement contingent, uncertain, provisional, unilateral, instead of the safety net provided for by the backstop,” the BSG statement said.

“Furthermore, the Northern Irish assembly has not sat for nearly three years, and it is questionable whether it would be able to reconvene and take on the responsibility for an international treaty of this nature.”

The plan for customs checks and controls on the island of Ireland would “breach a range of fundamental principles and red lines,” it said.

“The UK proposals on customs and on regulatory aspects explicitly provide for infrastructure, controls and checks but are unclear as to exactly where and how these would be carried out,” the committee said.

“Any form of controls and checks in and around the border would signify the end of frictionless trade and as such would harm the all-island economy as well as represent a serious risk to the peace process, and could imply a serious risk for our consumers and businesses.”

British sources said, however, that their proposals explicitly rule out regulatory checks on the island of Ireland by preserving regulatory alignment on the whole island. And they insist that customs checks would be far from the Border.

The MEPs warn that “At the same time, such controls would not be sufficient to guarantee the protection of EU consumers and businesses in all circumstances, thereby potentially leaving the EU with a significant hole in its single market.”

The UK’s suggestion of working out the details of how technology could be used to help with that during the Brexit transition period, the MEPs said, was unacceptable.

In Brussels, Boris Johnson’s “sherpa” David Frost was continuing technical discussions with the European Commission’s Brexit task force. The talks are expected to continue on Friday.

The commission was not adding to the cautious welcome president Jean-Claude Juncker gave to the new proposals on Wednesday, when he suggested they were still “problematic”. Those elements  of Mr  Johnson’s plan need to be fixed by the UK rather than the EU, a spokeswoman said on Thursday.

Brussels would not be left “holding the bag”, the spokeswoman said. “We would remind you that it’s the UK leaving the European Union and not the EU leaving the UK.”

She added: “We are doing everything in our power to ensure that exit is on an orderly basis and we are willing to engage constructively with our counterparts. But we are not going to be the ones left holding the bag, the ball, or any other kind of object.”