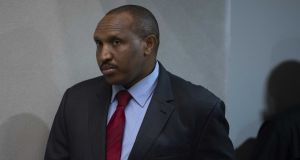 Former Congolese militia leader Bosco Ntaganda in the courtroom of the International Criminal Court in The Hague. Photograph: EPA/Peter Dejong

A warlord responsible for mass murder, rape and abduction in the Democratic Republic of the Congo has been sent to prison for 30 years – the longest sentence the International Criminal Court has ever given out.

The punishment handed to Bosco Ntaganda (46) on Thursday was immediately welcomed by human rights activists.

Ida Sawyer, deputy director of Human Rights Watch’s Africa division, said it sent a strong message that even people considered untouchable may one day be held to account.

“While his victims’ pain cannot be erased, they can take some comfort in seeing justice prevail,” Ms Sawyer said.

Ntaganda, whose cruelty and violence earned him the nickname “the Terminator”, was found guilty in July on 18 charges of war crimes and crimes against humanity for acts committed when he was a key militia leader in DRC’s restive Ituri province in 2002 and 2003.

The atrocities included a mass killing at a village where people – including children and babies – were “disembowelled or had their heads smashed in”, the court said.

Ntaganda was also found responsible for the rape and sexual slavery of underage girls, for recruiting troops under the age of 15 and for personally killing a Catholic priest. The conviction for sexual slavery is the first in the ICC’s history.

Prosecutors focused on two specific attacks involving Ntaganda’s militia, one in late 2002 and another in early 2003.

In one attack directed by Ntaganda, judges said soldiers killed at least 49 captured people in a banana field behind a village using “sticks and batons as well as knives and machetes”.

Ntaganda was also implicated in violence in 2008 that led to the deaths of at least 150 people, and was a founding member of the M23 rebel group, which was eventually defeated by Congolese government forces in 2013 in bloody battles around the city of Goma.

Anneke Van Woudenberg, a human rights activist who testified against Ntaganda at the ICC, said Ntaganda was a brutal warlord who led from the front, often killing, raping and torturing civilians himself.

“I interviewed hundreds of victims of the brutal crimes in Ituri whose lives were shattered. I hope that today they will have a small measure of relief knowing that Ntaganda will be behind bars for a very long time,” Ms Van Wouderberg said.

Ntaganda, born in Kinigi in Rwanda, had his first taste of combat in Uganda, where he joined the Rwandan Patriotic Front (RPF) in 1990 at the age of 17 and fought alongside Paul Kagame to overthrow Rwanda’s genocidal regime in 1994.

The first suspect ever to voluntarily surrender to the ICC, Ntaganda walked into the US embassy in the Rwandan capital, Kigali, six years ago and asked to be sent to the court, based in the Netherlands. Experts believe he gave himself up because he feared assassination after the collapse of the M23 movement.

The ICC had issued its first arrest warrant against Ntaganda for war crimes in Ituri in 2006 and the warlord became a symbol of impunity in the region.

Known for his pencil moustache, tailored uniforms and a penchant for fine dining, Ntaganda wore a dark blue suit and red tie to hear the verdict. He told judges during his trial that he was a “soldier not a criminal” and that the “Terminator” nickname did not apply to him.

The time Ntaganda has spent in detention at the ICC from 2013 would be deducted from the sentence, the court said in a statement.

The ICC was set up in 2002 as an independent international body to prosecute those accused of the world’s worst crimes where national authorities were incapable of bringing perpetrators to justice.

The ICC has also been criticised for mainly trying African suspects so far.

The east of the DRC remains violent and unstable. Armed attackers killed 10 people and kidnapped two others during a raid on a village near Beni in the east of the country, a local official said on Tuesday.

Six Congolese soldiers were also killed in clashes with rebels on Monday night, according to sources cited by the Kivu Security Tracker (KST), a website that monitors violence in the region.

The violence has severely hampered efforts to contain an Ebola epidemic, which has infected more than 3,000 people and killed more than 2,000 in the region since August last year. – Guardian