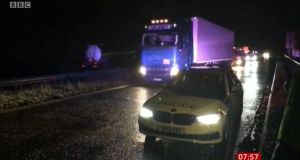 The truck in which fifteen people were found in Chippenham was owned by Cork company Delaney Transport international in Glanmire. Photograph: BBC News.

British police on Thursday night released without charge an Irish truck driver arrested for questioning about illegal immigration into the UK after 15 migrants were found in the back of his truck.

The man, who works for Delaney International Transport based in Glanmire in Co Cork, had been arrested by Wiltshire police on Wednesday night after they found 15 Iranian and Iraqi migrants in the back of his truck near Chippenham in Wiltshire.

Wiltshire Police confirmed in a statement that the man, an Irish national in his 50s had been arrested “on suspicion of assisting illegal entry into the country” but he was released without charge at around 7pm on Thursday from Wiltshire Police HQ in Swindon.

The driver was bringing a load of perishable goods in his refrigerated trailer from the continent back to Ireland by landbridge across the UK and had travelled by ferry from Calais to Dover before heading for Pembroke to catch the ferry to Rosslare.

It is understood that the driver may have to remain in the UK until late on Friday as Wiltshire police have yet to finish their forensic examination of his trailer but he is expected to leave the UK and return to Ireland over the weekend.

Operations manager at Delaney International Transport, Michael Delaney declined to comment on the matter on Thursday night until he had a chance to speak to the driver but he did speak earlier in the day to the Neil Prendeville Show on Cork’s Red FM.

“Our driver was on the way from Calais to Dover. The driver heard knocking and thought it was a flat tyre. He came off the motorway and pulled in to a lay-by. He then heard knocking from the trailer when the truck stopped,” said Mr Delaney.

“Another lorry driver, who had pulled in to the area, came over to see if everything was okay. That lorry driver then heard knocking on the trailer as well. The Delaney transport driver then immediately called the police who arrived to find 15 people in the back of the trailer.

“The driver was taken to the nearest police station and has been questioned,” said Mr Delaney adding that both he and his driver had been co-operating with the police all morning and will continue to do so.

The Irish Times understands that Delaney International Transport, unlike some hauliers do not drop off and collect different refrigerated trailers on the continent but rather bring back the same trailer with a new load of perishable goods that they brought to the continent.

The UK Home Office said the 15 migrants, “presented themselves as Iranian and Iraqi”.

Delaney Transport, which has been involved in the haulage business for 55 years, has a fleet of eight trucks and refrigerated trailers. All its employees are Irish, including those bringing perishable loads to and from the continent.

Wiltshire Police said they stopped the truck on the A350 at the Kington Langley crossroads near Chippenham after being called by a member of the public shortly before 8.30pm on Wednesday.

Gardaí in Cork say they have had no contact from police in Wiltshire requesting any assistance in the investigation.

The discovery of migrants in this truck comes after several people were arrested earlier this week by Vietnamese police in connection with the 39 migrants found dead in a lorry in Essex. They were held on suspicion of organising people smuggling overseas.

Essex Police said on Thursday that all 39 people found dead in the back of that lorry have now been formally identified.

A series of files had been brought before an identification commission with the assistance of Vietnamese police, police said.

Coroner Caroline Beasley-Murray has now formally identified all of the victims and their families have been notified. Ms Beasley Murray said: “May I take this opportunity to offer my deepest condolences to the victims’ families.”

All of the deceased were Vietnamese nationals, a spokesman for Essex Police said.

Vietnam sent a delegation of officials to the UK earlier this week to assist with the investigation. Police in the country have so far arrested nine people on suspicion of organising people smuggling.

Meanwhile, Essex Police have started extradition proceedings to bring Eamonn Harrison (22) from Ireland to the UK. Mr Harrison, of Newry in Co Down, appeared at Dublin High Court on Friday charged with 39 counts of manslaughter, along with human trafficking and immigration offences, and was remanded in custody.

The driver of the lorry, Mo Robinson (25), appeared at Chelmsford Magistrates’ Court on October 28th charged with 39 counts of manslaughter, conspiracy to traffic people, conspiracy to assist unlawful immigration and money laundering.

Detectives have also urged Ronan Hughes (40), and his brother Christopher (34), said to have links with the road haulage and shipping industries, to hand themselves in. The pair, who are from Armagh, are wanted on suspicion of manslaughter and human trafficking. – Additional reporting: Agencies