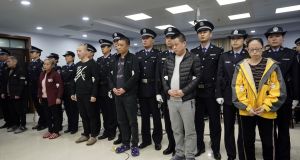 Defendants on drug charges standing with their handlers during a hearing at a court in Xintai, China’s Hebei province, on Thursday. Photograph: Office of China National Narcotics Control Commission/AFP via Getty Images

A Chinese court on Thursday imprisoned nine people, one whom got a suspended death sentence, on charges of smuggling fentanyl into the United States, in the first such case the two countries had worked on together.

China has faced US criticism for not doing enough to prevent the flow of fentanyl into the United States, and the issue has become another irritant in their ties, already strained by a bruising trade war that the two are now working to end.

The joint announcement of the successful action against smugglers, in front of a group of Chinese and foreign reporters invited by the Chinese government, comes as the two countries are expected to be close to signing an interim trade deal.

It is often used to make counterfeit narcotics because of its relatively cheap price, and it has played an increasingly central role in an opioid crisis in the United States.

Yu Haibin, a senior official with China’s National Narcotics Control Commission, told reporters in the northern city of Xingtai, where the court case was heard, that Chinese and US law enforcement had worked together to break up the ring. Members were accused of smuggling fentanyl and other opioids to the United States via courier.

The case originated in 2017 from the department of homeland security’s New Orleans office, which acted on a tip from an informant who provided contact information for a Chinese seller using the pseudonym “Diana”, Austin Moore, a regional attache with the department, told reporters.

One of the people sentenced by the court was given a suspended death sentence – which in practice is normally commuted to life in jail – and two got life sentences, Mr Yu said.

He said the case should not be connected to politics or the trade war, adding that the timing of the sentencing was the result of the legal process. There are two other joint fentanyl cases ongoing, he said.

“This should not be linked to trade, or other policy-related matters, because there’s nothing more important than a human life,” he said.

More than 28,000 synthetic opioid-related overdose deaths, mostly from fentanyl-related substances, were recorded in the United States in 2017, according to the US Centers for Disease Control and Prevention.

US drug enforcement officials have pointed to China as the source of much fentanyl and related supplies. China denies that most of the illicit fentanyl entering the United States originates in China, and says the United States must do more to reduce demand.

Mr Yu said that the issue of fentanyl was not something any one country could resolve.

“If illegal demand cannot be effectively reduced, it is very difficult to fundamentally tackle the fentanyl issue,” Mr Yu said.

In August, US president Donald Trump accused Chinese president Xi Jinping of not fulfilling a promise to crack down on fentanyl and its analogues.

Mr Yu said China was willing to work with US law enforcement authorities and all other international colleagues to fight narcotics and “continue to contribute China’s wisdom and power for the global management of narcotics”. – Reuters