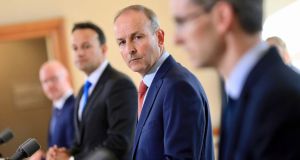 Publicans are understandably dismayed by the Government’s decision to delay, until September at the earliest, the reopening of pubs that do not serve food. That pausing of the reopening timetable will worsen the economic damage incurred by many pubs and put the viability of others in doubt. Nightclub owners and restaurateurs, who have been instructed by the State to close by 11pm, feel similarly aggrieved.

The licensing industry quite rightly points out that there have been no reported Covid-19 outbreaks traced to pubs that serve food, which have been open since June 29th. But, difficult as it will be for the industry, the Government realistically had no option but to follow the advice of the National Public Health Emergency Team and keep “wet pubs” closed for now. There have been a number of documented pub clusters in other countries - including in Scotland this week, where 32 cases were traced to a pub in Aberdeen.

Caution in reopening, combined with a redoubling of our personal efforts to hold the virus at bay, will be critical to the country’s ability to keep itself safe

Even without such evidence, it doesn’t take a virologist to see that an enclosed space full of uninhibited drinkers provides an ideal environment for the transmission of an airborne disease. By opting to keep pubs closed when daily Covid-19 case numbers were extremely low in June and July, the Cabinet set the bar for their reopening very high. Giving them the green light to welcome customers back now, when incidence of the virus is increasing, would have seemed perverse.

In effect, the Government has sacrificed pubs in order to reopen schools. That’s partly a public health calculation; anything that could increase community transmission could in turn jeopardise the plan to have children back in the classroom at the end of the month. But it’s also a political calculation: if pubs were allowed to reopen and schools were to remain closed in September, even if there were no direct link between one and the other, the Government would face such public anger that its travails of recent weeks would seem trivial by comparison.

A rising number of Covid-19 cases is clearly cause for concern. Yet greater transmission rates were inevitable as the economy was brought slowly back to life, and there is some reassurance to be taken from the fact that so few people (12) are in hospital with the virus. Moreover, the large majority of recent cases are linked to existing clusters, and it appears that the State’s test-and-trace infrastructure, which was slow to develop, is now in a stronger position to hunt the virus down.

We find ourselves at a critical juncture, however. Trends across much of continental Europe are worsening, and we know that the virus can spread rapidly. Caution in reopening, combined with a redoubling of our personal efforts to hold the virus at bay through our own behaviour, will be critical to the country’s ability to keep itself safe.