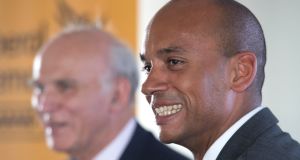 Chuka Umunna has claimed his actions are “the antithesis of what it is to climb up the greasy pole” as he defended representing a third party in less than six months.

The Streatham MP has switched from Labour to Change UK to an independent since the start of the year and has now joined the Liberal Democrats.

Mr Umunna criticised MPs who “sit in their comfort zone” and “plough on regardless” after joining the Lib Dems and insisted he was putting his principles ahead of his career.

He said: “I actually think it’s a bad thing in British politics for people to plough on regardless of the facts.

“The easy thing is to sit in your comfort zone in a party that you know is doing the wrong things, that has changed beyond belief and not do anything about it because personally for you, that’s the best course.

“I get called a careerist but . . . the things I’ve done are the antithesis of what it is to climb up the greasy pole.

“You don’t leave the political security of one of the two main parties to further your career — anyone can tell you that.”

Mr Umunna said the Lib Dems had changed their stance on austerity, which he criticised repeatedly as Labour’s shadow business secretary across the despatch box from current Lib Dem leader Vince Cable.

He praised the Lib Dems for voting against “every single one” of the Conservative budgets since 2015 and standing on an anti-austerity manifesto in 2017.

This morning, I went on the Today programme to explain my reasons for joining the Liberal Democrats. Have a listen ⬇️ #r4today pic.twitter.com/GiJJPsg0KY

Mr Umunna added: “Most importantly, the biggest impediment to ending austerity currently is pressing on with Brexit.

“In every Brexit scenario, tax receipts will be hit hard, depriving the exchequer of much-needed revenue.

“Both Labour and the Conservatives are committed to facilitating Brexit and you cannot end austerity and sponsor Brexit.”

As a Labour MP, Mr Umunna stood briefly in the 2015 leadership contest, which was eventually won by Jeremy Corbyn, and was also widely expected to take on a leadership role in Change UK.

With the Lib Dems currently running their own leadership contest, with Jo Swinson and Ed Davey going head to head, Mr Umunna said he would not be entering the fray.

“I’m not going to become the leader of the Lib Dems,” he said. “That’s not what this is about at all.”

He also declined to back either candidate, with Mr Davey sitting in the front row and rival Ms Swinson sending apologies from her Scottish constituency.

Mr Umunna said: “I’m very conscious I’ve only just arrived in the Lib Dems and I have to earn the trust and gain the confidence of its membership.

“If I just walked in and said right, I think that person should be leader now, that would be rather arrogant and presumptuous.”

On the question of how many more MPs could follow in Mr Umunna’s footsteps, Cable said it was “clear we share values and objectives” with “quite a few” independent MPs.

He said there was “now a substantial chunk” of Tories who would walk away from a party led by Boris Johnson or another hard Brexiteer.

“There is now a substantial chunk of Conservatives who have crossed the Rubicon mentally and no longer feel part of the Conservatives in view of their position on Brexit.

“Where they go, when they go I can’t predict, but it is important we talk to them.”

The Lib Dem leader also claimed the “suppressed civil war in Labour” may also yield some scalps to his party and “stability is far from guaranteed”.

He said: “If you’re asking for names and dates, I can’t give you them but we are reaching out to that cohort of people and we expect over the coming months to bring them in.”– PA