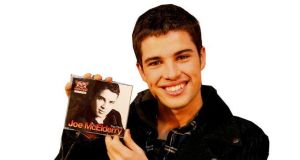 PREDICTION STUDY:TWO STUDENTS predicted that Joe McElderry would win the recent X-Factorcompetition before the results were announced. They would also have been able to show Susan Boyle would come second earlier in 2009 behind Diversity in the Britain’s Got Talentcompetition.

Their methods, based on a computer analysis of tweets between Twitter users, could also be used to spot consumer trends, predict the results of elections and sample public sentiment on an issue.

Ben McRedmond (17) and Patrick O’Doherty (16), two fifth years from Gonzaga College, Dublin demonstrated the power of their social networking analysis system, We Predict, at the BT Young Scientist and Technology Exhibition. It was developed over more than five months and is based on storing and studying a growing database of 24.5 million tweets which hold clues about what people are thinking.

“We run analysis on the data to make predictions and identify trends, and we can take snapshots of time,” explained Ben.

Twitter makes all its messages openly available and can readily be uploaded, said Patrick. Their system can then study the tweets for key words, for example Joe or Boyle, and also words that indicate the tweeter’s views, for example great or cool as opposed to poor or useless. Tweets are very short, no more than 140 characters long, and so will be information rich, Ben added.

They conducted a trial on the Britain’s Got Talentresults and found that their system predicted the win for Diversity despite Susan Boyle’s apparent popularity. “We decided there might be something in this,” said Patrick.

They then analysed tweets related to X-Factorfinalists Joe McElderry and Ollie Murs and predicted that Joe would take 62 per cent of the vote. In the end, he won by 61 per cent, Ben said. They believe their We Predict system could be used to predict elections and spot trends.

Their next prediction? The big push for 3D television seen at last week’s Consumer Electronics Show in Las Vegas will come to nothing as consumers seemed unimpressed, they said.