The declining tradition of the Christmas box 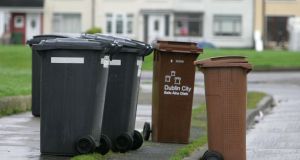 “Everything is totally commercial now. The binmen have no leeway whatsoever. I would call this industry merciless.”

Andrew drives a bin lorry for a private refuse company around one of the commuter counties near Dublin. He has no doubt when the tradition of the Christmas box – gifts or cash given by householders to people who provide them with services during the year – declined. “When the word recession hit the newspapers, it just died overnight,” he says. “It would be nice if it picked up again overnight.”

Andrew tells the possibly apocryphal story of a man from the sales section of an Irish bin company who, one Christmas, drove the route ahead of a bin lorry and picked up all the cash, alcohol and other gifts that had been left for the bin men. It would put you off sellotaping the envelope to the inside of your bin. Or, as it is these days, sellotaping three envelopes to the inside of three separate bins.

To most people the Christmas box means – or used to mean – cash. The reasons given for its decline were various. “The people don’t have the money they used to have,” said Damien Tuohy, a rural postman based in Gort, Co Galway. “And some of them don’t have any money at all.”

The exception to the decline of the Christmas box lies in Finglas, where the owner of a beauty salon did not want it named in case her staff were hit for tax on their tips. One young worker said: “The people of Finglas are fantastic tippers all year round.”

Indeed the day the Irish Times visited a woman tipped €4 on a €10 eyebrow wax, which staff say is routine. The beauticians will work until lunchtime Christmas Eve, doing “lots of nails and tans – and lashes is a given”. They’ll probably get €5 to €10 from each regular, as well as cards, sweets and scented candles.

In Jim Hatton’s hair salon in Ranelagh, stylists will get generous Christmas tips.

“And clients are very good,” says Sharon Walsh. “They give the girl on the basin a tenner on Christmas Eve.”

Best of all is the client who has a huge platter of food sent over from the Italian shop opposite, on Christmas Eve, when things are frantic.

It is less affectionate in the bin business. “Everything is totally commercial now,” says Andrew of his relationship with his customers. “The binmen have no leeway whatsoever. I would call this industry merciless.”

“Most of them are professionals and they’re not there after half-seven in the morning,” says Noel Adamson, of householders on his postal route in Clontarf. “ I’d be happy enough if they say good morning to me. Most of the time I only see the elderly, who give you a wave just to show they’re alive.”

Noel has been a postman for 33 years. “Fifteen or 20 years ago I’d probably get about €300 at Christmas. Now I’d be lucky to get €100. If I get something from four or five houses I’d be surprised.” There are 700 postal addresses on Noel’s route.

“It’s always the people who don’t have it who give you money,” says Jimmy Holmes, another postman who has a mixed delivery round – “houses, farms and big, big multinationals” – near Lucan.

“When the customers go out of their way it’s humbling, it really is. Then there are the companies who you’d be delivering hampers to and it’s totally cold; you have no dealings with them.”

During the boom Jimmy got a Christmas card from some regular customers and found it contained €100. He returned it to them. They insisted. Since then Jimmy’s Christmas box has remained the same – at €150 to €200 over the month of December – because, he says, “it’s always the same people who give”.

Andrew doesn’t blame bin customers for not giving at Christmas. For a start there are so many different bin companies. “There could be a queue of bin lorries going into a housing estate,” he says. The charges have gone up. The electronic tagging of bins means that the binmen have no discretion about lifting a bin if the account is empty.

“That leaves a bit of bad feeling with people,” he says. “One Christmas Eve five years ago we picked up the best part of €1,000, which was a fair bit between the lads.”

But those days are gone. There are two men with Andrew on the truck and they say they could service 500 houses and get no Christmas gifts.

Everyone interviewed noted the rise in gifts of bottles of wine – “I appreciate them, even though I’m teetotal,” says Noel Adamson; chocolates; and Christmas cards with no money enclosed – “which are nice, actually”, says Andrew.

The three postmen say they do not require a Christmas box, because they love their jobs (they all volunteered that information) and are paid to do them. Although, as Jimmy Holmes points out, “cash is incredible, because it’s money you can’t save”.

Damien Tuohy in Gort regards fixing old ladies’ televisions and feeding people’s cats when they’re on holidays as part of his job. He’d rather talk about the impact of the household charge on the elderly, and about how the petrol filling station has replaced the rural shop, than about getting tipped at Christmas.

“I suppose you might get a couple of hundred euros,” he says. “It’s the poor people who give it. I often didn’t take it. I’d say, ‘Give it to the child’.”

Noel Adamson looks into the overflowing postbox on Vernon Avenue at Seafield Road junction, shakes his head, and rings the office again. Postmen are strong believers, not so much in the Christmas box as in human contact. On his last route Noel says: “I had one guy, Harry, and every year I got three hankies, a naggin of whiskey and a fiver. Yes, it was beautiful. Harry was 93 the last time I saw him.”

Parties to continue talks with Sinn Féin despite Drew Harris’s IRA comments 01:40
The view from Clondalkin: If Sinn Féin don’t get in, ‘there will be marches’ 01:00
Who was L’Arche founder Jean Vanier? 01:00
Medical Council makes fresh finding against obstetrician Peter Van Geene 01:00
Italy has first coronavirus death 23:44