Zappone to address Boston conference on abuse in Ireland 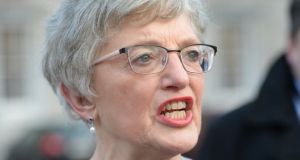 Minister for Children and Youth Affairs Katherine Zappone will be keynote speaker today at a conference at Boston College in the US which will discuss how best to address abuse issues and their consequences in Ireland.

Last week Ms Zappone, herself a graduate of Boston College, announced the Government decision to excavate the site of the Mother and Baby Home at Tuam, Co Galway, where the remains of possibly many hundreds of infants and children are believed interred.

The two-day academic conference titled Towards Transitional Justice: Recognition, Truth-telling, and Institutional Abuse in Ireland brings together internationally renowned scholars in the field of “transitional justice”, as well as Irish survivors of historical abuses, activists, and other stakeholders.

Its purpose is to discuss whether and how Ireland might adopt a “transitional justice” approach in dealing with its legacy of adoption and historical abuse.

“Transitional justice” has been employed to establish peaceful democracy in many countries following periods of political repression and violence. Organisers of this week’s Boston conference argue that the principles of “transitional justice” have much to offer an Ireland dealing with large-scale systematic human rights violations in the country since independence in 1922.

It is estimated that approximately 100,000 children born to unmarried mothers in Ireland between 1922 and 1998 were adopted (both legally and illegally) and boarded out. In addition, academics have calculated that by 1951 more than 1 per cent of the Irish population was incarcerated.

This occurred in institutions such as Magdalene Laundries, County Homes, Mother and Baby Homes, children’s institutions and psychiatric hospitals, frequently without any legal authority.

Systematic sexual, physical and emotional abuse, as well as labour exploitation in Church-run institutions in Ireland has been the subject of several State inquiries over the past 20 years.

Conference organisers point out, however, that despite this many people who were abused in such institutions and their family members remain unable to access their personal records or to discover the whereabouts of graves. This is because the Irish State imposes secrecy over relevant administrative records related to the abuses.

It draws on 77 witness statements from conversations with 164 people separated from their family members through Ireland’s forced, secret adoption system and related historical abuses.