Zappone plans to halve number of homeless children in 12 months

Minister for Children ‘extremely concerned’ about 2,000 in emergency accommodation 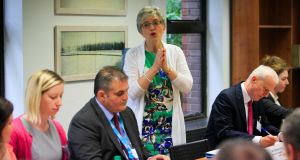 Minister for Children Katherine Zappone has said she would like to halve the number of children who are homeless within her first year in Government.

The latest figures from Focus Ireland show more than 2,000 children are in emergency accommodation nationwide.

Ms Zappone said she was “extremely concerned” about the high number of children without homes.

“I would consider it a failure if we don’t move to that as quickly as possible.

“Especially with children in emergency accommodation. I’m hoping we will see some change really in the next month or so.”

The Independent TD was speaking ahead of the meeting with more than 10 children and homeless organisations on Thursday.

Ms Zappone said she would bring the key proposals to Minister for Housing Simon Coveney before he finalised the housing and homelessness plan.

“There will be a section of that plan for children who are homeless,” she said.

Ms Zappone said the front-line agencies had told her some of the main concerns were that children were often placed in hotels a far distance from their school and parents had no facilities to cook meals.

“They may be receiving meals but is it good enough for them the way it’s happening? We’re concerned it may be encouraging overeating or fast food and that kind of thing,” she said.

“If families are living for months in a hotel their diet is poor because they have no choice. Children living in emergency accommodation are living on takeaway food and processed meals, and we’re seeing it in the malnutrition and child obesity levels,” she said.

“In some cases families have been living in hotels for months.”

Ms Tinsley said she was “hopeful” some of the organisations’ recommendations would be implemented.

“I’m pleased our voices were heard but it needs follow through and to be translated into action,” she said.

“Children need to have access to places to play, do homework, invite friends over and to do normal things children do. There needs to be normal family function.”

Tanya Ward, chief executive of the Children’s Rights Alliance, said there was no doubt the issue was a serious crisis for Government.

“A home provides the foundation for almost everything in a child’s life. Emergency action is needed to end the inexcusable misery that families displaced from their homes are currently experiencing,” she said.

“The use of commercial hotels being used to house people in emergency accommodation is not sustainable for family life. We are calling on Government to carry out a short-term review of the suitability of such accommodation to ensure that children and families are not placed in appropriate commercial hotels and facilities,” she said.

Ms Ward said figures from Safe Ireland showed 4,381 requests for accommodation due to domestic violence could not be met in 2014 as the refuges were full.

“Refuges remain at capacity levels today. Many of those turned away ended up in emergency homeless accommodation as a result. This is something the Minister is well-placed to address,” she said.