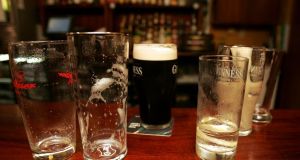 Irish people aged 18 to 24 had the highest rates of binge drinking in the European Union, according to the Central Statistics Office (CSO).

The data, released on Wednesday, showed more than a quarter of men and more than 15 per cent of women aged 18 to 24 in Ireland engaged in binge drinking at least once a week in 2014.

Binge drinking is defined as six or more standard drinks in one session, equivalent to three pints of beer or six pub measures of spirits.

Irish women are more likely to have a third-level qualification than men, according to the latest data.

The CSO data showed more than 55 per cent of all women aged between 25 and 34 had a third-level qualification in 2016, compared to 43 per cent of men in the same age group.

The data shows distinct polarisation when it came to the qualifications men and women had attained; more than 80 per cent of graduates in engineering, manufacturing and construction were male last year, and almost 80 per cent who graduated in information and communication technologies were men.

Women represented more than three-quarters of the graduates in health and welfare areas and more than 70 per cent in education.

The graduate differences extended to employment; more than a third of women at work in Ireland in 2016 were working in the health and education sectors. The sectors with the highest proportions of men were construction, agriculture, and transport.

The pattern was also evident at secondary level.

Fewer girls left school early, at almost 5 per cent compared to 8 per cent in men.

Men also had a higher rate of unemployment than women in 2016, almost 10 per cent and 7 per cent respectively.

Ms Cahill said women were significantly under-represented in decision-making structures in Ireland at both national and regional levels. Less than a quarter of TDs in Dáil Éireann were women in 2016, and only just over 20 per cent of local authority members were female.

“The average female representation in national parliaments in the EU in 2016 was 28.7 per cent,” she said.

Ireland was below the EU average for smoking, though, with just under a quarter of males aged 15 and over were smokers in 2014, compared with a fifth of females.

Irish men and women were both above the EU average for obesity and close to two-thirds of men and almost half of women were overweight.

Last year, there were 98 men per 100 women in Ireland, though there were more boys than girls. There were fewer men aged 25 to 34 years because more men have emigrated in recent years, according to the CSO report.

At older ages there were more women, because they live longer. A woman’s life expectancy in Ireland was more than 83 years, while a man’s was almost 80.