‘Mental health is a class issue. With money you can buy help’ 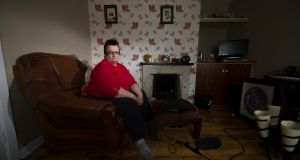 Anne Foley: “If you have money you can buy a psychiatrist or a psychologist, or you can buy services for your child if they need them.” Photograph: Patrick Browne

Anne Foley (54) describes feeling “absolutely worthless” in a hospital emergency department when her mood so low she could hardly speak.

Having told a doctor she could “no longer live this life”, she was told to go home.

“I have taken overdoses and attempted suicide in the past and knew it was coming on. I called an ambulance because there was no-one else I could call. I was very low and told the doctor, ‘I can’t live this life any more. Please, please help me.’

To tell someone in that state they have to wait, it’s criminal. It’s a matter of life and death

“He said: Anne I can see you’re in a bad place. I know you need help, but I have no bed for you. You’ll have to go home.’

“It was a Friday night and I was being told to go home and get through three nights and two days, on my own, until the mental health services opened.

“To go to a service when you are so low you can hardly lift your head, to tell someone you don’t want to be alive and to be told to go home, I felt worthless.

“I felt worthless anyway. But to tell someone in that state they have to wait, it’s criminal. It’s a matter of life and death.”

She said this happened four years ago. But many times over 20 years, she said, she accessed but was turned away from mental health services.

Ms Foley, who lives in New Ross, Co Wexford, said she has made a number of suicide attempts since she had a breakdown in 1999.

Mental health in Ireland is absolutely a class issue

She said this followed the death of her mother, the break-up of her marriage and loss of contact with her children in one six-month period.

She has spent time in psychiatric hospitals and been on up to 16 medications at a time, leading to her weight increasing dramatically and to her being “almost permanently catatonic” through the early 2000s.

She has always been dependent on the public mental health system.

“I am OK if I am struggling, Monday to Friday, 9am to 5pm. But outside those hours, here in Wexford, there is no out-of-hours service. All there is is Caredoc [out of hours urgent service], or A&E.

“Mental health in Ireland is absolutely a class issue,” she said.

“If you have money you can buy a psychiatrist or a psychologist, or you can buy services for your child if they need them. If you don’t you are at the mercy of the public system. Who can afford to see a psychiatrist privately, at €120 an hour? I can’t.”

Ms Foley was speaking in the aftermath of a post-budget row in which the Department of Health was accused of “double counting” its figures.

It emerged that €20 million of the €35 million funding pledged in Tuesday’s Budget for mental health services in 2018 had already been promised in 2017.

On Wednesday the College of Psychiatrists said the Government showed “a lack of commitment, vision and real concern for...those vulnerable in society due to mental distress and chronic enduring mental illness”.

Mental Health Reform, a coalition of campaigning organisations, said it was “deeply concerned that essential mental health services will not be in place for people in mental distress”.

On Thursday Minister for Health Simon Harris committed to an additional €15 million for mental health services.

Though welcoming the development, advocates said it did not go far enough. Total funding for mental health services next year, at €912 million, represents about 6 per cent of the total health budget for 2018.

“It falls far short of the international norms in similar jurisdictions,” said Dr Miriam Kennedy, director of education with the College of Psychiatrists. She said services were under increasing pressure with increased demand and a crisis in recruitment and retention.