Women in politics will be key measure of gender equality – Higgins 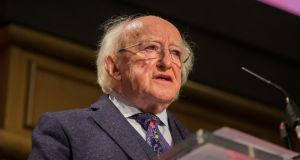 President Michael D Higgins praised the achievements of the women’s movement at the in Dublin Castle on Sunday night. Photograph: Gareth Chaney Collins

The proportion of women in national parliaments will be a key measure of success in achieving gender equality and would “spur, in turn, further progress”, President Michael D Higgins has said.

Speaking at the International Congress of Parliamentary Women’s Caucuses in Dublin Castle on Sunday night, Mr Higgins said he had never seen the women’s movement in Ireland “more vibrant or full of confidence, or more capable of overturning all those still existing injustices than it is shaping to be”.

Parliamentarians and speakers from more than 40 countries have gathered in Dublin for the two-day conference that will celebrate the centenary of women winning the right to vote.

Other speakers at the event include Taoiseach Leo Varadkar who will address the congress on Monday.

Mr Higgins praised the achievements of the women’s movement, noting the proportion of female national parliamentarians had increased from 11 per cent in 1995 to 24 per cent now, but said that this reflected “a slower pace of change than many of us had hoped and indeed reasonably expected”.

“The structural effects of globalisation on the international economy have both created and foreclosed opportunities for women, creating new possibilities for liberation even as they reinforce and even exacerbate existing gender inequalities,” he said.

In the rustbelts of the old industrial world, working-class jobs traditionally undertaken by men have been gradually eroded even as vast few factories have spring up in the southern hemisphere “where women workers are often subject to unsafe and hazardous conditions”.

He referred to the collapse of the Rana Plaza building in Bangladesh in 2013 that killed 1,135 people in the country’s worst industrial disaster. The building housed five garment factories supplying products for western retailers including Benetton, Walmart and Primark.

“The workplace is now, in some settings more than ever across the world, the site of struggle against sexism, discrimination and exploitation,” he said.

“Women still carry the double burden of labouring in the fields and factories, and in the house. The UN estimates that women do three times the amount of unpaid domestic labour and care work, so that on average women spend nearly 20 per cent of their day undertaking the unpaid work necessary to sustain their families.”

Mr Higgins invoked the memory of the first Irish female parliamentarian Constance Markievicz and her sister Eva Gore-Booth as champions for the role of Irish women.

The reduction in public services in the developed world over the past 30 years has left “the burden of caring and of responsibility” on women in education, housing, social care or health, he said.

The President referred to the importance of the UN’s sustainable development goals aimed at eliminating hunger and poverty by 2030 in improving the rights of women, from eliminating discrimination to recognising the value of unpaid work to ensuring women’s full and equal participation in decision-making.

“Most urgently, they have pledged to eradicate female genital mutilation, one of the most gross human rights abuses of our own time,” he said.

“Accomplishing these tasks will demand such international solidarity as a kind displayed by the women’s movements through the years.”