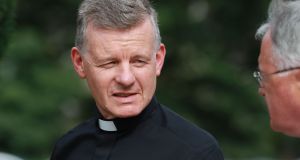 From one ministry to another, former Green Party leader Trevor Sargent completed his latest journey in life on Saturday evening at Christ Church Cathedral in Waterford city and took the first steps on his next journey as a newly-ordained priest.

Surrounded by family members, friends, colleagues from his days in education and politics, and his new parishioners and colleagues in the Church of Ireland, the Rev Trevor Sargent did not stray far from the principles which first led him into public life as he vowed to make tackling issues such as homelessness and climate change part of his service.

“Homelessness is ultimately a mirror to our society: unfortunately as a society, as long as we tolerate homelessness it’s a reflection on our politics, which needs to be thought about very seriously,” he said after the ordination ceremony, adding that climate change is also a “key issue” for all churches.

Hundreds gathered in the medieval cathedral for the two-hour ordination, which was led by the Bishop of Cashel, Ferns and Ossory, Rev Michael Burrows, assisted by many clergy from across the country, including the registrar Canon Ruth Elmes and the Dean of Christ Church Maria Jansson.

Among the attendance were the Rev Sargent’s wife, Áine Neville, parents Mildred and Harry, brother Derek, as well as friends such as the leader of the Green Party, Eamon Ryan, and former TDs John Gormley and Dan Boyle. A number of local politicians, including the Mayor of Waterford Cllr Joe Kelly, were also present.

Much of the ceremony was conducted in Irish, reflecting the former TD and school principal’s love of the language and he said afterwards that he would be introducing a regular Irish-language service at Christ Church. He will serve at four parishes, Waterford , Tramore, Annestown and Dunmore East.

“Right from my schooldays, it’s been on the cards,” the Rev Sargent said of his vocation. “In a way, I was providing some expression of that faith through my work in teaching and politics.”

He was first elected as a TD in 1992, having sat on Dublin City Council where tackling planning corruption was one of his main concerns, and led the Green Party from 2001 until July 2007. He was a minister of state in the Fianna Fáil/Green Party coalition from July 2007 until his resignation in 2010 and lost his Dáil seat in 2011.

He officially became a priest at 5.03pm on Saturday when Bishop Burrows handed him a Bible and presented him to the congregation, who were loud in their applause.

Afterwards, he described the day as “amazing” and said that while his new role may seem in complete contrast to that of a politician, “when you look at what ministry is about and what politics is about, there’s a level of service and pastoral care that is present in teaching, politics and ministry.”

During the homily, the Archdeacon of Ossory and Leighlin, the Venerable Andrew Orr, wished him well in his ministry: “You won’t get every pothole filled, but you, and the people wherever you find yourself, will dream dreams together. Put them into action. You never know what difference you will make.”