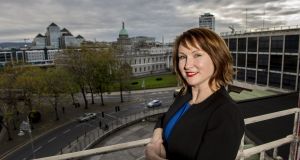 Moninne Griffith of BeLonG To: ‘We still regularly have young people arrive on our doorstep, having been asked to leave the family home because they have come out.’ Photograph: Brenda Fitzsimons/The Irish Times

Young LGBT people are still being “asked to leave” their homes after coming out to family, a leading campaigner for LGBT (lesbian, gay, bisexual, transsexual) rights has warned.

Speaking in advance of International Day Against Homophobia, Transphobia and Biphobia (IDAHOT) on Friday, she said while young people, their parents and teachers “know it can still be really hard” to be young LGBT in Ireland, “everyone else seems to think, because we have marriage equality and gender-recognition legislation, everything is just fine now”.

“But there is still a long way to go to unpick all the stigma and discrimination against gay and trans people, much of which goes unchallenged.

“We still regularly have young people arrive on our doorstep with all their belongings, having been asked to leave the family home because they have come out, or because a care-placement has broken down after they came out. Thankfully that happens less now and it is extreme, but what is ongoing is the fear young people have of coming out – fear of being rejected by the people they love, of being bullied in school, of being fired from their job.”

So powerful was the sense that “everything is okay now for LGBT people”, she said, that some young people were ashamed their lives were “not perfect” after the 2015 marriage referendum.

IDAHOT, which falls annually on May 17th since 2004, is celebrated in more than 130 countries, including 37 where same-sex acts are illegal. The date was chosen to mark the anniversary of the 1990 decision by the World Health Organisation to declassify homosexuality as a mental disorder.

There can be a danger that people pat themselves on the back after marriage equality and say, ‘Everything is fine now’

“There can be a danger that people pat themselves on the back after marriage equality and say, ‘Everything is fine now.’ Especially in the current climate, across Europe and in the United States, we see a stalling of progress and even regression in rights.”

There could appear to be “an acceptable level of discrimination that trans people should just be expected to put up with . . . IDAHOT is important as a yearly call to give thought to how society responds to discrimination and hate crime.”

Discriminatory language could sound like “banter” to people, but is like “a million little paper-cuts” to young LGBT people, said Ms Griffith.

A report published this week by the International Gay, Lesbian, Bisexual, Trans and Intersex Association, the Rainbow report, ranked Ireland 17th out of 49 European countries in terms of LGBT rights.

It measures rights under headings including employment, family and gender recognition rights. Malta was found to be the most respectful of LGBT rights and Azerbaijan the least. Ireland ranked behind neighbours such as the United Kingdom, Portugal and Greece.

From Monday, Teni will spearhead a large-scale advertising campaign to combat transphobia, while BeLonG To is urging people to respond to its survey on the atmosphere for LGBT young people in schools. Findings will be published in the autumn.