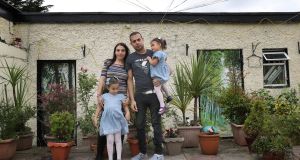 Serena Di Murro and her partner Mohammed Hemida with Elysia (4) and Amaya (2): “Every time you click in, it comes up as ‘no appointment available’.” Photograph Nick Bradshaw

Thousands of renewal applications from those needing visas to live in Ireland are building up due to the immigration system being overwhelmed by Covid-19, the Immigrant Council of Ireland has said.

A new online system covering registrations and renewals in the Dublin region that went live this month has led to a stream of calls to the council’s helpline from those who say it is not working.

Although the Government issued blanket rolling visa renewals since immigration offices closed in March, a lack of physical documentation means people are having trouble with employment and securing driving licences. It can also affect their ability to return from travel outside the State.

Those living on visas in Ireland usually renew them at designated Garda stations outside Dublin and at the Irish Naturalisation and Immigration Service (Inis) office on Burgh Quay in the capital.

However, as part of the country’s response to the coronavirus outbreak in March, all of those offices were closed down and the system ground to a halt.

The Department of Justice announced rolling short-term renewals to all visas requiring renewal, at first to May 20th, and then extended into July and August.

It recently issued guidance on the reopening of some services outside the capital and in Burgh Quay, as well as the launch of a new online system for those living in Dublin in a bid to reboot immigration procedures.

However, the council, which assists applicants with various problems, says the disruption to the system has caused various knock-on problems as well as clogging the system with thousands of backlogged applications.

Colin Lenihan, information services co-ordinator, said the issues have led to a drip-feeding of last-minute information for those reliant on the system and “a whole new level of stress to the already problematic process”.

He explained that even though people were granted automatic renewals in recent months, these did not result in the issuing of updated paperwork.

Serena Margherita and her Egyptian partner, Mohamed Hemida, are among those feeling anxious about the current situation.

Although Serena is Irish, her partner arrived in 2006 and spent 10 undocumented years in the country working in the fishing industry.

When the couple had their first child Elysia (4) in 2016, they decided to begin the process of formalising his status.Even though he was a father to two Irish children (Amaya arrived in 2017), it took the couple six months to navigate the heavily bureaucratic process and secure a one-year resident’s visa.

Their real difficulties began in 2018 with the Inis’s online appointment system which seemed permanently oversubscribed – a problem they believe will be worse in the Covid-19 era.

“Every time you click in, it comes up as ‘no appointment available’,” explains Serena. “You can’t imagine what it’s like just sitting [endlessly] in front of a laptop.”

Serena ultimately ended up paying an anonymous third party €20 and €30 over social media for internet bots used to secure her an online appointment. As their October deadline approaches again, she is worried this route may not even be available given the demand.

“I can feel the anxiety,” she says. “Why do I have to feel like this . . . [Mohamed] has a legitimate reason to be here.

“I am dreading October. I lie awake at night thinking, am I going to get an appointment?”

Mr Lenihan said: “People who don’t have resident permit cards or stamps on their passports find it extremely difficult to engage with services outside of immigration,” he said, noting in particular the ability to hold on to jobs or to apply for social welfare payments, education grants or drivers’ licences.

“There wasn’t any long-term view on how to deal with Covid.”

In a statement, the Department of Justice said “Like all public services we have had to adapt to the new circumstances occasioned by the pandemic. We will continue to do so as resources permit”.

Regarding its online renewal service, it said to date the department had approximately 10,000 applications submitted “with only a very small number of issues since the launch of the online system which were quickly resolved”.