Varadkar urged not to forget ‘undocumented’ living in Ireland

Some of the up to 26,000 undocumented in Ireland issue photos in call for regularisation 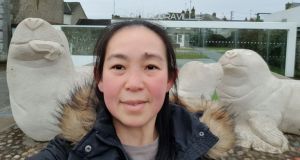 Jo, originally from Malaysia, posts her selfie online on Friday to raise awareness for the undocumented in Ireland. ‘I’m in Ireland for 15 years as a childminder. I want the Irish Government to know I live here, work here and belong here.’

Undocumented migrants in Ireland have called on the Government to remember “the other undocumented” in Ireland as Taoiseach Leo Varadkar pleads the case of Irish nationals living illegally in the United States.

To mark the St Patrick’s Day weekend, nearly 100 undocumented men and women living across Ireland will on Friday post selfies of their faces, homes and families online to raise awareness of the estimated 20-26,000 people living and working in Ireland illegally.

The majority of undocumented migrants in Ireland entered the State legally, many on study visas and decided to remain after their visas expired.

More than a third of undocumented living in Ireland come from the Philippines, with large numbers also coming from China and Mauritius, according to the MRCI.

The undocumented in Ireland primarily work in the food and accommodation sector or in care work.

The Migrant Rights Centre of Ireland said a report from the Justice Committee showed 89 per cent of undocumented people were working, a third of whom have held their current jobs for more than five years.

“We’re now 20 years into our migration journey, we’re no longer a country of recently arrived immigrants,” said Helen Lowry from the MRCI

“People are here long term and their children are growing up in Ireland undocumented.”

“Our message to political leaders is simple: as they are highlighting the situation of the undocumented Irish over there, undocumented migrants want to remind them of the other undocumented Irish; that they live here, belong here and are contributing to Irish society.”

Last September, the MRCI accused the Government of “hypocrisy” after it voiced strong support for the Irish undocumented in the United States following president Donald Trump’s decision to end the Daca programme which gives temporary legal immigration status to people who arrived in the US illegally as children, noting there was “nothing like Daca in Ireland”.

Minister of State David Stanton for Equality, Immigration and Integration has said a general regularisation programme for the undocumented could have “any number of unintended and expensive consequences” and would “invariably have implications for our immigration controls”.

The Migrant Rights Centre of Ireland (MRCI) will post photographs and stories of undocumented person living Ireland on their Facebook page throughout Friday.