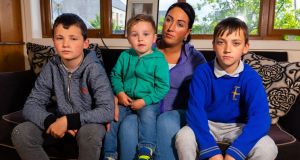 Michelle O’Brien with Tommy, Jamie and Joey, three of her seven children. She is a qualified beautician but has been unable to work due to the family’s insecure housing situation. Photograph: Tom O’Hanlon

A homeless family in the midlands, who have been placed in three separate hotels in three different counties in the past week, may finally be accommodated in a house where they can stay until permanent social housing is identified.

Michelle and Patrick O’Brien, and their seven children aged between three and 14, have been in hotel and holiday-home accommodation in Co Offaly, Co Meath and Co Westmeath this week.

On Friday, however, after their case was highlighted in the media, they were told by the Peter McVerry Trust – which has been working with them since Monday – a temporary house had been sourced in Co Offaly. They have yet to view it, however, and are unclear where in the county it is. If it is unsuitable, they will be moved to a holiday home in Co Limerick on Monday.

Until Monday, they had been in a hotel in Banagher, Co Offaly, for eight weeks and before that in a hotel in Tullamore for almost a year.

The figures represent a decrease in child homelessness when compared with May 2018, when the figure was 3,826. The total number of homeless people a year ago was 9,846.

Minister for Housing Eoghan Murphy said the homeless numbers are not acceptable, but he argued that the Government’s actions are easing the housing crisis.

“We are making progress but it is very disappointing and very, very frustrating that we still have more than 10,000 people in emergency accommodation,” he said.

Efforts to strengthen tenancy rights and Monday’s ban on short-term letting in rent pressure zones in cities are part of “unprecedented” State action to tackle the crisis, he said.

Cutting red tape “too far” to spur further construction would lead to more “Priory Halls”, he said, referring to the defective apartments built in north Dublin, and “the wrong houses in the wrong locations”.

In the case of the O’Briens, the couple have been paying €80 a week to Offaly County Council towards their emergency accommodation, since they became homeless in June last year. The family has been on the council’s housing waiting list, for rented social housing, since 2012.

They returned home to Tullamore, Co Offaly, from England in May last year for family reasons.

Ms O’Brien is a qualified beautician but has been unable to work for the past year due to the family’s insecure housing situation.

Among those advocating for them are the Offaly Traveller Movement and Tusla.

“What happened this morning was we got call from the Peter McVerry Trust and they said one of their staff would come to discuss the house tomorrow. We don’t know where in Offaly it is,” said Ms O’Brien on Friday.

A spokeswoman for the trust said: “Our first response in any case is to ensure that the family has immediate access to accommodation in whatever appropriate form is available in short notice.

“We can confirm that we have now secured an accommodation option in Co Offaly where the family can stay pending identification of a long-term housing solution.”