Taoiseach rebuts Oxfam claim that Ireland is a tax haven

Enda Kenny tells the Dáil: ‘We have not been and never will be a brass plate location’ 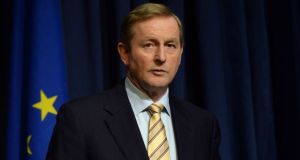 Taoiseach Enda Kenny has rebutted claims in an Oxfam report that Ireland is one of 15 tax havens.

“We do not meet any of the international standards for being considered a tax haven,” he told the Dáil.

Mr Kenny said: “We are fully compliant with all the best practices in the areas of transparency and exchange of information.”

And he added: “We have not been and never will be a brass plate location”.

The Dublin Central TD said, in the last 30 years, net profits posed by the worlds’ largest companies more than tripled from €2 trillion to €7.2 trillion but that increase was not matched by a rise in corporate income tax returns.

But Mr Kenny noted that Oxfam included Ireland’s 12.5 per cent corporation tax rate as one of the factors for deeming it a tax haven.

“The 12.5 per cent is fully in line with the OECD and international best practice in having a low rate and applying it to a very wide tax base.”

He said Ireland had nothing to hide and had been very clear and upfront about all these matters.

Independent TD Stephen Donnelly agreed with the Taoiseach that Ireland is “absolutely not a tax haven” but, he said, “there is a growing international perception that we just might be”.

In 2013, Ireland was singled out as a tax haven by the US Senate committee on homeland security. In 2015, the UN special rapporteur on extreme poverty reported that when lists of tax havens are drawn up – Ireland is always prominent among them.

Mr Donnelly said Oxfam was “absolutely on the money” when it said Ireland offered tax incentives to certain sectors which allowed them to avoid paying tax.

He pointed to US firm Cerberus which had filed 2015 accounts for Project Eagle with £168 million in taxable profits, but which paid less than £1,600. That is a 0.001 per cent tax rate.

Mr Donnelly said the Government made significant moves on vulture funds in the Finance Act, under section 110.

However, he said, about half of what came under that section had been moved out and “we have no idea where it has gone”.

He called for the Taoiseach to look favourably on legislation that would force money in a qualified investment fund or other vehicle, to file publicly accessible accounts.

Mr Kenny said the US senate claim had since been disproved.

He said not everything had been done in terms of dealing with such issues but he was sure that if further changes had to be made, the Minister for Finance Michael Noonan would be willing to do so.