Thousands of women in Ireland subjected to female genital mutilation

Conference on tackling violence against women held in Dublin 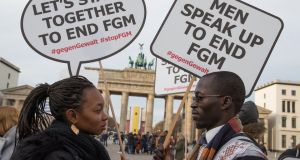 Almost 6,000 women and girls in Ireland have been subjected to female genital mutilation (FGM), a conference on violence against women heard on Tuesday.

Alwiye Xuseyn, manager of the migrant women’s support organisation Akidwa, said the figures were based on estimates using data from the 2016 Census.

Extrapolated from data gathered last year on age, religion and country of origin the estimates indicate in 2016 about 5,790 women and girls living here had endured the practice, compared with about 3,780 in 2013 – a 53 per cent increase.

FGM – also known as female circumcision or female ‘cutting’ – involves cutting away part or all the external female genitalia. It is more common across the northern half of the African continent and is widely recognised as a violation of women’s and girls’ human rights. It has no medical benefit and is performed to decrease or eliminate women’s enjoyment of sex.

Ms Xuseyn said it was clear migration was continuing from countries where FGM was practised and there was a need for support services for women and girls who have experienced FGM.

Dr Katy Radford said it was “almost impossible to monitor” FGM as girls were almost always removed from Ireland, to return to their family’s home country, to have the procedure carried out by traditional ‘cutters’. Vulnerable girls were particularly at risk, she said, during summer or Christmas school holidays.

“We are particularly uninformed about the extent of the practise. The safeguarding of girls and young women has to be a concern.”

They were speaking at the conference, titled ‘Dare to Dialogue”, hosted by Akiudwa, on engaging men and faith leaders in strategies to combat male violence against women.

Held as part of the international ‘16 days of activism against gender-based violence’ campaign, it was organised in the hope of bringing men into the strategies to “help prevent a backlash from dominant male partners by enabling men to understand how changes in women’s roles could have a positive impact on the family and give men a chance to adjust to these changes”.

Alan O’Neill, of the Men’s Development Network, described his role in facilitating workshops with groups of men on addressing the impact of a culture of ‘toxic masculinity’, rooted in patriarchy, on them.

He said social conditioning about men’s and women’s roles ran very deep within all societies and fundamental change would take time.