Tuam babies: PR chief Terry Prone: ‘there appears to be a lot more to it’ 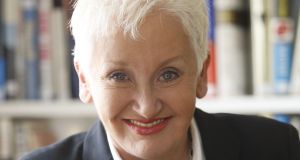 Terry Prone wrote to a French TV company when the issue first arose saying they would find “no mass grave” at the Tuam home.

The head of a PR company who appeared to play down concerns surrounding the mother-and-baby home in Tuam two years ago has conceded there now “appears to be a whole lot more to it”.

Terry Prone, whose company The Communications Clinic acts for the Bon Secours religious order at the centre of the investigation, wrote to a French TV company when the issue first arose saying they would find “no mass grave” at the Tuam home.

“If you come here you’ll find no mass grave, no evidence that children were ever so buried and a local police force casting their eyes to heaven and saying, ‘Yeah a few bones were found – but this was an area where famine victims were buried. So?’,” Ms Prone wrote to the France 2 documentary producer who had contacted the order looking for information on the subject.

She continued: “Several international TV stations have aborted their plans to make documentaries because essentially all that can be said is Ireland in the first half of the 20th century was a moralistic, inward looking, anti-feminist country of exaggerated religiosity which most of us knew already.”

The content of the letter, which originally came to light in 2014, was again the subject of comment on Friday in the wake of the announcement by the Mother and Baby Homes Commission of Investigation that “significant quantities” of foetal remains had been found at the Tuam site.

When contacted by The Irish Times, the Communications Clinic said Ms Prone had no further comment on the subject.

On Friday morning on RTÉ radio, Ms Prone said there now appeared to be “a whole lot more to” the situation than was apparent at the time of her letter.

“Nobody expected the kind of numbers that are being revealed today. Clearly there was extensive burial,” she said on the Today with Sean O’Rourke programme.

“I am fascinated by the commission’s use of the phrase ‘in this way’ because it sounds as if it was a disrespectful mass burial rather than proper burial, which I don’t know what to make of that.”

“And one other thing, what did they die of? Was it malnutrition, was it lack of care? What was it that killed the children?”