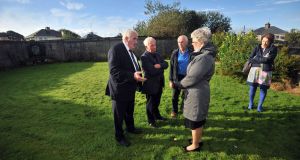 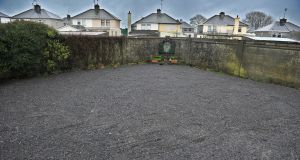 The site of a former mother and baby home in Tuam, where there is now verified evidence of remains of a significant number of babies and young children. Photograph: Ray Ryan 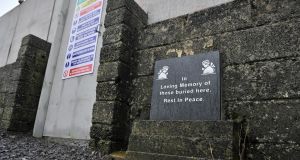 Human remains of a significant number of babies and infants up to three years of age have been found on the site. Photograph: Ray Ryan

Human remains of a significant number of babies and infants up to three years of age have been found on the site of the former mother and baby home in Tuam, Co Galway, it has been confirmed.

This follows work by the Commission on Mother and Baby Homes which carried out planned excavations there.

Local research records 796 infants and children recorded as having died in the Tuam home run by the Bon Secours Sisters between 1925 and 1961. There is not as yet any indication of exactly how many bodies have been discovered at the site.

In a statement on Friday, the commission said it was “shocked” by the discovery of remains in an underground chamber and was continuing its investigations.

“The stratigraphic survey which was conducted in October 2015 identified a particular area of interest and identified a number of sub surface anomalies that were considered worthy of further investigation,” the commission said.

“These were further investigated by a test excavation in November/December 2016 and in January/February 2017.

“Test trenches were dug revealing two large structures. One structure appears to be a large sewage containment system or septic tank that had been decommissioned and filled with rubble and debris and then covered with top soil. The second structure is a long structure which is divided into 20 chambers.”

The commission said it had not yet determined what the purpose of this structure was but it appeared to be a sewage tank.

The commission had also not yet determined if it was ever used for this purpose.

“In this second structure, significant quantities of human remains have been discovered in at least 17 of the 20 underground chambers which were examined,” it said.

“A small number of remains were recovered for the purpose of analysis. These remains involved a number of individuals with age-at-death ranges from approximately 35 foetal weeks to two to three years.

The commission said it was “shocked by this discovery and is continuing its investigation into who was responsible for the disposal of human remains in this way”.

“Meanwhile, the commission has asked that the relevant State authorities take responsibility for the appropriate treatment of the remains. The coroner has been informed.”

In a statement, the Bon Secours sisters said they were “fully committed to the work of the commission regarding the mother and baby home in Tuam”.

“On the closing of the home in 1961, all the records for the home were returned to Galway County Council, who are the owners and occupiers of the lands of the home.

“We can therefore make no comment on today’s announcement, other than to confirm our continued cooperation with and support for the work of the commission in seeking the truth about the home.”

“It was not unexpected as there were claims about human remains on the site over the last number of years.

“Up to now we had rumours. Now we have confirmation that the remains are there, and that they date back to the time of the Mother and Baby Home, which operated in Tuam from 1925 to 1961.”

Ms Zappone said: “We must respond sensitively and respectfully to the situation.”

Her department had brought together all of the key departments and agencies to set out a way forward, she added.

The commission would continue its work under its terms of reference, including such matters as postmortem practices and procedures, reporting and burial arrangements for residents of mother and baby homes.

Galway County Council would also engage with the commission in relation to the immediate next steps on the site.

“Today is about remembering and respecting the dignity of the children who lived their short lives in this home. We will honour their memory and make sure that we take the right actions now to treat their remains appropriately,” Ms Zappone said.

The commission, which was established in February 2015, is tasked with investigating allegations of abuse at 14 institutions and four county homes between 1922 and 1998.