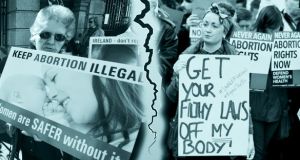 The option of replacing the Eighth Amendment regulating abortion with a more liberal constitutional provision is favoured by 38 per cent of voters, against 28 per cent who want to see the current constitutional ban removed completely to allow the Dáil to legislate on the issue. Illustration: Paul Scott/The Irish Times

For the full results of the latest Irish Times/Ipsos MRBI poll, click here.

There is stronger support among voters for a new constitutional amendment regulating abortion than repealing the Eighth Amendment, according to the latest Irish Times/Ipsos MRBI opinion poll.

The option of replacing the Eighth Amendment with a more liberal constitutional provision is favoured by 38 per cent of voters, against 28 per cent who want to see the current constitutional ban removed completely to allow the Dáil to legislate on abortion.

Any new constitutional amendment on abortion would have to be quite restrictive if it were to meet the wishes of voters outlined in today’s poll.

Voters are in favour of making abortion legal in a number of limited instances, but just 28 per cent of respondents said they agreed that abortion should be legal “where a woman believes she would be unable to cope because of her age or circumstances”. Some 60 per cent of voters are opposed to the legalisation of abortion in such cases.

The 8th Amendment to the constitution gives equal rights to the mother and the unborn child. Repealing the 8th amendment would change the law so that termination could be made legal. Which of the following statements, if any, most closely represents your view on this issue?

However, voters are in favour of making abortion legal in a number of circumstances where it is currently outlawed, the poll suggests. These include in cases of rape, incest or child abuse, where 77 per cent of respondents said abortion should be legal.

There is similar majority in favour of the legalisation of abortion in cases where the foetus will not survive outside the womb.

Half of voters (50 per cent) say that abortion should be legal where the child would have a severe mental or physical handicap, with 36 per cent of voters opposed and 14 per cent saying they don’t know.

Just 44 per cent support legal abortion where a woman is threatening suicide – currently grounds for abortion under the Protection of Life in Pregnancy Act – with 38 per cent opposed.

This includes 10 per cent of voters who say they are opposed to abortion “under any circumstances”.

There is little public support for allowing late-term abortions. Asked if abortion should be legal after 24 weeks, just 11 per cent agreed. Some 78 per cent of people said it should be illegal in such circumstances, including the 10 per cent opposed in any cases, and 10 per cent said they don’t know.

The Citizen’s Assembly, which is considering the future of the Eighth Amendment, will meet against this weekend in Dublin. It is due to make recommendations to the Dáil and the Government by the end of June.

Its recommendations will then be considered by a special Oireachtas committee before the Government and ultimately the Dáil make any decisions in 2018. Any referendum –- if that is what is decided – will not be held until the middle of next year at the earliest.